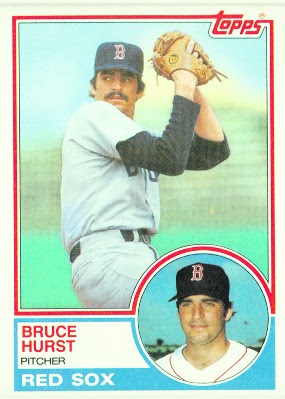 Card:  Hurst shows up on his first solo card after sharing cards with fellow Red Sox prospects in '81 and '82.
Pic:  I don't recall Hurst with a mustache. Some guys look good with a mustache but  Hurst isn't one of them.
Player:  Bruce Hurst was a first round pick of the Red Sox in the '76 draft.  Debuting in the bigs in '80, Hurst was roughed up for 33 runs in 30.2 innings.  The next year Hurst pitched fairly well in five September starts.  Hurst was in and out of the rotation in '82 and was knocked around for a 5.71 ERA in 28 games, 19 of them starts.
The big lefty would prove to be a reliable starter, logging over 210 innings each of the next three years with records of 12-12, 12-12, and 11-13.  Hurst's ERA over this time frame was 4.09, 3.92, and 4.51.
Despite missing six weeks of the '86 season with a groin injury, Hurst had one of his finest seasons, throwing four shutouts with a 2.99 ERA.  Hurst was fantastic in the postseason giving up just two earned runs in both of his ALCS starts against the Angels.  As the Red Sox advanced to the World Series, Hurst was tabbed as the Game 1 starter and he delivered eight innings of shutout ball in the 1-0 win.  Hurst also earned the win in Game 5 with a complete game, two run effort.  A rainout allowed Hurst to start Game 7.  Hurst pitched five innings of one hit ball before the Mets broke through with three runs in the sixth.  The Mets eventually got to the pen and won the Series.
Hurst would win 15 and 18 games the next two years and Boston returned to the playoffs in '88 thanks to strong stretch drive from Hurst (8 wins, 2.30 ERA from Aug 7 forward).  Despite allowing just four runs in two starts, Hurst was hung with the loss in both starts against the eventual AL champion A's.
Hurst left the Red Sox via free agency for the Padres and had a career year in '89.  His 2.69 ERA and 244 innings were career bests and he led the NL with 10 complete games.  He registered 6.6 WAR, but his name was curiously absent from CY voting as his teammate Mark Davis took home the award.  Hurst continued to pitch well with ERAs of 3.14, 3.29, and 3.85 over the next three years.  He earned double digit wins and logged over 217 innings each year from '90-'92.
Hurst suffered from a torn labrum and rotator cuff late in the '92 season which effectively ended his career. He pitched briefly and ineffectively for the Padres and Rockies in '93 and Rangers in '94.  Hurst retired at age 36 with 145 wins and a 3.92 ERA.
Stuff:  Fastball (mid to high 80s), Slow Curve, Forkball, Slider 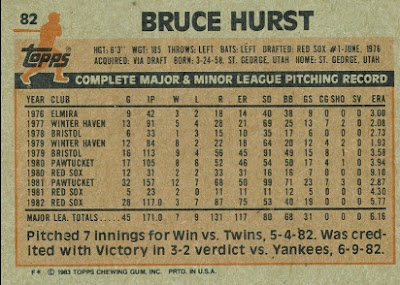 Flipside:  As indicated Hurst went seven innings on May 4.  He would not work any deeper than that in '82 but would go on to throw 83 complete games over the next ten years.
Oddball:  Whew, a lot of weird stuff about Hurst to choose from...
-First off Hurst's middle name is Vee.
-While in the minors with Pawtucket in '81, Hurst threw five shutout innings in what would be the longest game in baseball history﻿.
-That same year, Hurst retired briefly in 1981 before getting called up to Boston.
-On 4/10/89 he pitched a one-hitter to earn his first NL win and also got his first hit as a batter.
-As pointed out on his Wikipedia page, the letters in BRUCE HURST can be re-arranged to read B RUTH CURSE.
History:  Hurst will be remembered as the player who would have been the World Series MVP in '86 had things worked out differently for Boston.  He was a solid pitcher with the Red Sox and had some even better seasons in San Diego.  He pitched two one-hitters in his career and was an All-Star in 1987.
Since retiring as a player, Hurst has been involoved with several international ventures such as serving as China's pitching coach in the Asian Baseball Championship ('03-'05) and World Baseball Classic ('06).  He also has been involved with the MLB European Academy in Italy to evaluate European talent.
Hurst is currently a Special Assistant for Player Development for the Boston Red Sox.
Posted by Brandon at 8:59 PM