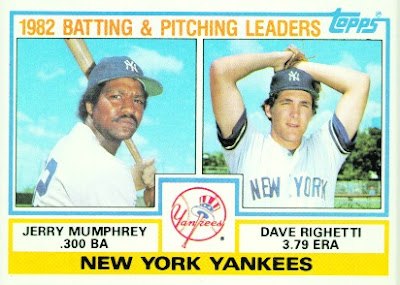 Team Leaders: Mumphrey led the '82 Yankees in batting average and triples (10).  Righetti led the team in ERA and K's with 163.  Righetti would spend one more year in the rotation before moving to the bullpen.  Dave Winfield topped the Yankees in HR and RBI with 37 and 106.  Reggie Jackson was no longer stirring the drink, having departed for the Angels via free agency.
Record:  New York finished in fifth place in the AL East at 79-83﻿.  It would be the Yankees only year between 1973 and 1988 with a losing record.  They entered the last series of the year at 79-80 but were swept by the Red Sox. 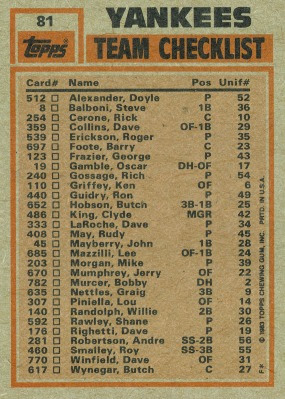 Flipside:  The back lists 28 players, the most of any team so far, plus manager Clyde King.  The HOFers are Winfield and Gossage and notables such as Gamble, Griffey, Murcer, Nettles, Piniella, Randolph, Righetti and several other good players.  Yankee owner George Steinbrenner saw all this talent and expected better results as the team went through Bob Lemon and Gene Michael as managers before King took over.
Most Common Starters:
C   Rick Cerone
1B John Mayberry
2B Willie Randolph
3B Graig Nettles
SS Roy Smalley
LF Dave Winfield
CF Jerry Mumphrey
RF Ken Griffey
DH Oscar Gamble

Veteran Lou Piniella and switch hitting Dave Collins filled in the outfield and DH while Butch Wynegar platooned with Cerone.
This team wasn't the most athletic and had poor range with -71 runs below average in Total Zone rating.

All was well with the top three starters sporting ERAs better than league average.  Alexander was rancid (6.08 ERA) and the youngsters Morgan and Erickson weren't up to the task.  Rawley split time between and the rotation and the pen.  Frazier and May logged 100+ innings each with good ERAs, while Goose closed things out.