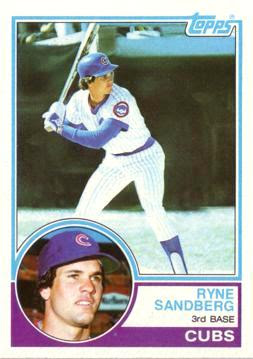 Card:  This is Sandberg's rookie card and the first one of the big three HOF rookie cards to appear in the set.
Pic:  The background in the action shot looks really strange, and in the inset Sandberg looks like he's is in a Marlboro ad.
Player:  Ryne Sandberg started his pro career as a Phillie and made his debut with them as a SS in September 1981.  Feeling that he was better suited for 2B or 3B, where veterans Manny Trillo and Mike Schmidt were stationed, they dealt him and Larry Bowa to the Cubs for Ivan de Jesus who was coming off a terrible season.(.194/.276./.233...yikes!)

Sandberg played at the hot corner and moved over to second base late in the year when the Cubbies checked out young Pat Tabler at 3B.  Sandberg was steady, batting .271 with 32 stolen bases and finished 6th in NL ROY voting.  For the '83 season, the Cubs traded for veteran 3B Ron Cey﻿﻿ making Ryno's move to 2B permanent.  At second base Sandberg showed good hands, plus range, and an accurate arm winning the first of nine consecutive Gold Gloves.  Although he was already a brilliant fielder he hadn't yet found his groove at the plate and batted just .261 with 8 home runs in '83.

Sandberg and the Cubs both flourished in '84.  Sandberg gained acclaim on 6/23/84 by launching game tying bombs in the 9th and 10th in a Cub 12-11 win over the Cardinals on national TV in what became known as The Sandberg Game (<---video).  Sandberg for the game was 5-6, with 7 RBI and a whopping 1.078 win probability added.  The Cubs advanced to the postseason for the first time in nearly 40 years.  Despite seven hits and three steals from Sandberg, the Cubs lost to the Padres in the NLCS.  Sandberg's breakout season included 114 runs, 36 2B, 19 3B, 19 HR, 32 SB, and a .314/.354/.520 line.  His MVP season was the start of ten straight All-Star selections and the first of seven silver slugger awards.

Sandberg settled in as a top offensive threat over the next four seasons, hitting for power, averaging 19 HR from '85-'88 with a .286 batting average. In '89 Ryno hit 30 HR for the first time, batted .290, topped the NL with 104 runs scored, and helped lead the Cubs to first place finish in the NL East.  Chicago was knocked out in five games as Sandberg contributed a HR, four RBI, and eight hits in 20 at bats.

The 30 year-old slugged a career best and league leading 40 dingers in 1990.  He led the NL in runs (116) and total bases (344) while reaching 100 RBI for the first time.  He also went 123 games without an error, a record since broken.  Sandberg hit 26 HR the next two years while batting .291 and .304.  Before the '92 season, Sandberg signed a four-year $28.4 million deal making him the highest paid player in the sport at the time.  1993 was a disaster as he missed April with a broken hand and missed three weeks with a dislocated finger.  Although he managed to hit only 9 HR, he batted .309.
As changes within the Cubs organization and a pending divorce weighed on the 34 year-old Chicago hero, Sandberg decided to retire in the middle of '94.

Sandberg stayed retired for a year and a half before returning for the '96 season.  The time off didn't effect his power as he hit 25 HR, but his bat had slowed and resulted in a career high 116 strike outs and an unfamiliar .244 batting average.  Playing in only 135 games in '97, he hit 12 HR and batted .264 before calling it quits for good. 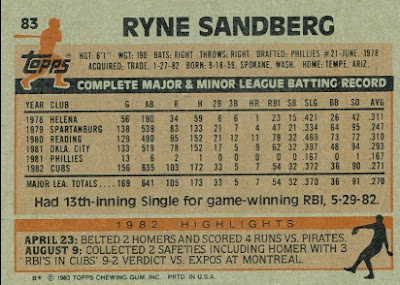 Flipside:  Sandberg was used as a pinch runner seven times and never got a start﻿ as a Philly.
Oddball:  Sandberg is the only player to have both a 50 stolen base season (54 in '85) and a 40 home run season (40 in '90).
His parents chose his first name after seeing relief pitcher Ryne Duren's name in a headline.
By 1995 Sandberg had already penned two autobiographies.  The first titled Ryno was after his MVP season. The second book, Second to Home, was in response to questions and wild rumors that sprung up after his first retirement.  Among the whispers were that Sandberg had retired because he had AIDS, was going to play basketball for the Phoenix Suns, or that he had been hired by NASA. (see paragraph titled intermission )
History:  Sandberg is clearly one of the best second basemen to ever play the game.   He hit 277 HR while playing second base, a record until it was broken by Jeff Kent in 2004.  Sandberg retired with 2,386 hits, 1,061 RBI and 344 stolen bases.  A complete player, Sandberg's .989 fielding percentage was a record for second sackers at the time of his retirement.  He was inducted into the HOF in 2005.
Sandberg managed in the Cubs system from 2007-10 and was constantly rumored to be in line for the major league job until Mike Quade was hired.  Sandberg left the Cubs organization to manage the Phillies AAA affiliate in 2011 and was named Minor League manager of the year by Baseball America.  Sandberg interviewed for the vacant manager's post in St. Louis when Tony LaRussa retired.
Posted by Brandon at 5:29 PM