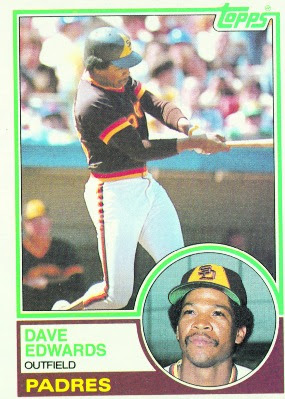 
Pic:  A nice photo of Edwards swinging the bat.  In the inset  pic the rarely used Edwards looks perturbed.  Maybe a coach just told him "Hey Edwards, you're starting today, nah just kidding".
I wonder why Topps used a green border with the Padres cards.
Player: Dave Edwards was drafted by the Twins in the 7th round in 1971.  Having just turned 17 years old in February, Edwards started his pro career that summer in Rookie ball.  Eight years and 839 games later, Edwards made his debut as a September call up in 1979.  Used in center and leftfield, Edwards racked up 44 at bats and batted .250 with a home run in his first taste of MLB action.

Edwards made the Twins to start the '79 season and was initially used as a pinch runner and defensive replace-ment.  He played all three outfield positions and by July was starting more than not.  He batted .249/.323/.389 with 8 homers and 6 stolen bases on the year.

In 1980, Edwards was platooned in the outfield as a right-handed contrast to the rest of the Twins left-handed outfield of Rick Sofield, Ken Landreaux, and Hosken Powell. Edwards batted .250 with 2 HR in 200 at bats.  An indication of Edwards struggles was his 12/51 walk to strikeout ratio.

Before the '81 season the Twins sent Edwards to the Padres in exchange for pitcher Chuck Baker.  Edwards started against lefties but curiously batted only .198 when he had the platoon advantage.  He played mainly rightfield and batted just .214 overall in 112 at bats.  Edwards started only six games the entire '82 season.  He registered just 55 at bats with most of his action as a defensive sub.  He batted a meager .182 and was released at the conclusion of the season.  Edwards finished his career with a .238 average, 14 home runs and 12 stolen bases. 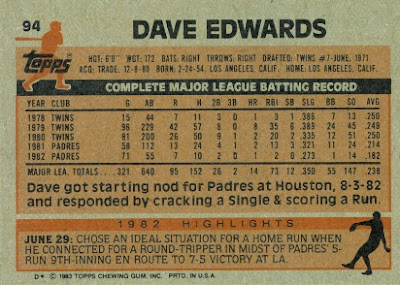 Flipside:  Unfortunately for Edwards, these are his career stats.   You know it's a rough year when Topps gets wordy in the highlights.
Oddball:  Edwards has twin brothers Mike and Marshall who both played in the majors.  We'll see Marshall much later in the set.  None of the three had prolonged careers and it's interesting to compare.  Career slash stats for the three:
Dave         .238 / .301 / .350    640 at bats
Mike         .250 / .280 / .298    879 at bats
Marshall   .258 / .267 / .316    310 at bats
Oddly Dave played for the Twins but neither of his twin brothers did.
History:  Edwards  was used a lot in his career as a defensive replacement and pinch runner.  His stats do not indicate he was particularly adept at either task.  Although his range was adequate for the corner outfield spots, his range factor in center was below average.  In his short career he made 20 errors resulting in a terrible .958 fielding percentage.  His base stealing stats or his two career triples don't indicate anything more than average or slightly above average speed.  At the plate he didn't get on base enough or hit for much power.  By the end of 1982 his career had run its course and Edwards was done playing before he turned 29.
Posted by Brandon at 5:19 PM