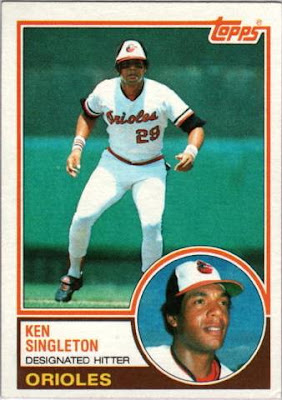 Card:  Singleton appears on his 13th Topps card.  Like the subject of the previous post, #84 Milt May, Singleton was included in every Topps set from '71-'85.
Pic:  Singleton looks like he's leading off second base.  It would be a better shot if we could see his face a little better, but I suppose that is what the inset photo is for. 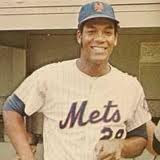 Player:  Ken Singleton was a draft pick of the NY Mets in 1967.  By 1970 he was tearing up the International League to the tune of .388/.513/.703 through 64 games when he got the call to join the Mets.  Singleton played left and right field and batted .263 in 198 at bats.  The next year Singleton began to show flashes of the player he would become, hitting 13 homers and walking every sixth plate appearance to give him an OPS+ of 120.  His power and patience would help him to an OPS+ over 101 every year until 1984.
Just before the start of the '72 season the Mets traded their 24 year-old switch-hitting outfielder along with Tim Foli and Mike Jorgensen to the Expos for Rusty Staub. 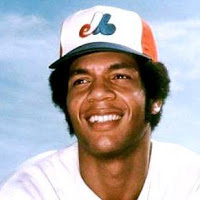 Singleton played both corner OF spots for the Expos in '72 and was able to play everyday batting .274/.363/.410 with 14 HR.  The next year he settled in as the everyday rightfielder.  Playing in all 162 games, Singleton batted .302 with a league best .425 OBP thanks to 123 base on balls.  He also belted 23 dingers and drove in 103 runs and got enough recognition to finish 9th in the MVP vote.  His power dropped in '74 as he hit only 9 HR but he still got on base at a .385 clip.  Although he had 20 OF assists in '73, his defense began to be a concern as he had subpar range and committed 11 errors in '74.
The Expos traded Singleton and  Mike Torrez in December 1974 to Baltimore for Rich Coggins, Dave McNally and a minor leaguer.  Singleton became a vital part of the O's offense providing power and superior on base skills.  From 1975 through 1983 Singleton would average 20 home runs a season with 94 walks.  His stat line over that time   290/.396/.456.  Singleton made his first All-Star team in '77 as he batted .328/.425
/.507 with an OPS+ of 165. He finished third in the AL MVP race behind Rod Carew and Al Cowens.
Singleton's best year was probably 1979 as he batted .295/.405/.533 with a career best 35 HR and 111 RBI.  Singleton was runner-up to Don Baylor for AL MVP.  At the time, Singleton was only the second switch-hitter in AL history to hit 35 HR in a season (Mantle was the first).  The Orioles fell to the Pirates in the '79 Fall Classic even though Singleton batted .357 in the series.
Singleton had a solid season in 1980 batting .304 with 24 long balls but his skills began to fade in the following seasons.  By 1982 he was a full time DH and was no longer hitting 20 homers a season.  Singleton struggled in the '83 ALCS and without a DH in the World Series against the Phillies, Singleton was limited to two plate appearances.  The Orioles won the Series though and the 36 year-old veteran had won a championship ring.  Singleton was a shell of his former self in '84 batting only .215 with little power and was released following the season.
Singleton amassed 2,029 hits and 246 HR to go with 1,263 walks in his career.  He batted .282 with an impressive .388 OBP.  Since his career ended he moved into broadcasting first for the Orioles and Expos and since '97 he has been broadcasting Yankee games. 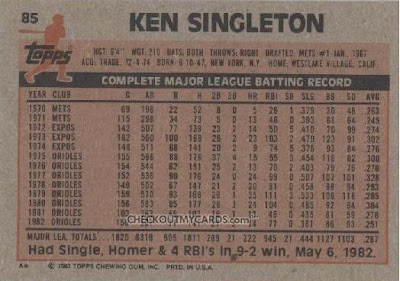 Flipside: You can see that Singleton walked 100+ times in his career on four occasions but never led the league finishing in 2nd place six times.
Oddball:  From his Wikipedia page:

In the 2003 edition of the Historical Baseball Abstract by Bill James, James' wife Susan McCarthy picked Ken Singleton and Carlton Fisk as the best looking players in the 1970s. Upon reading the entry, Singleton sent her a thank you card.

History: Singleton is often overlooked as he didn't amass 3,000 career hits or 300 HR.  What he did do was drive in runs and get on base, with the latter being appreciated more and more by the sabermetric savvy fans.  While not really Hall of Fame worthy he had a very solid career and won a championship with the Orioles in '83.
Posted by Brandon at 9:12 PM