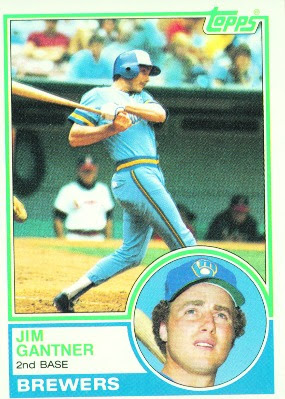 Card:  This is Gantner's 6th Topps card.
Pic: The left-handed Gantner follows through with a swing as the Brewers play the Angels.  I bet Gantner would have some funky hat-hair if we could somehow pry his hat off.
Player:  Jim Gantner was drafted in '74 and had brief trials with the Brewers in '76 and '77.  Having played primarily third base in the minors, Ganter stuck with Milwaukee in '78 as a utility infielder.   Playing sparingly, Gantner batted .216 in 97 at bats.  He was able to play a bit more in '79 playing 70 games filling in at 2B and 3B for Paul Molitor and Sal Bando﻿ and batted .284.
Due to Bando's decline and an injury to Molitor, Gantner was able to play semiregularly in 1980.  Again splitting time at 2B and 3B, he batted .282 in 415 at bats.  With Molitor playing in the outfield in '81, Gantner played everyday at 2B and showed good range and a steady glove fielding .984 while batting .267.  The Brewers lost in the divisional playoffs to the Yankees with Gantner going 2 for 14 in 4 games. 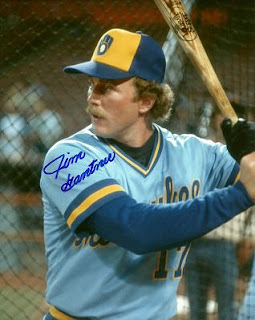 Gantner batted ninth and started at second base most of the time for the Brewers loaded lineup in '82 and hit a career best .295.  After a 3-16 ALCS against the Angels, Gantner excelled in the World Series going 8-24, with 4 doubles and a triple.  However Harveys Wallbangers fell short of the championship as they lost the World Series to the Cardinals in seven games. 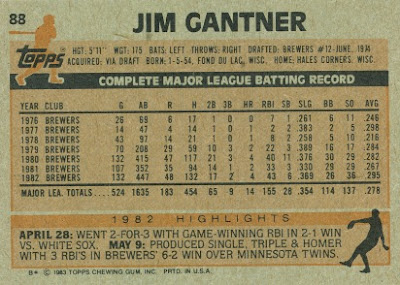 Flipside: Gantner's .295 batting average in '82 was his career best and he was very consistent usually batting in the .270 - .280 range.  Because he never walked much his OBP% would hover just over .300 each year.  In fact from '79-'91 his OBP was between .300 and .336 each year.
Oddball:  In a 8/29/79 game the Brewers found themselves getting pounded by the Royals early.  To save the bullpen the Brew Crew sent out Sal Bando to pitch three innings, Gantner one inning and Buck Martinez finished up with an inning.  I don't recall ever coming across a game where three position players pitched.
History:  Gantner was a consistent performer for the Brewers for 17 seasons. Gumby was solid but not flashy in the field and well liked by his Brewer teammates and fans.
His career spanned from playing with Hank Aaron (Gantner pinch-ran for him in Aaron's last game) to young Brewers such as Gary Sheffield and Greg Vaughn.  Through the years he played his entire career with Hall of Famer Robin Yount.
Now a days Gantner is involved with several business ventures and has coached off and on since retiring.
Posted by Brandon at 6:54 PM