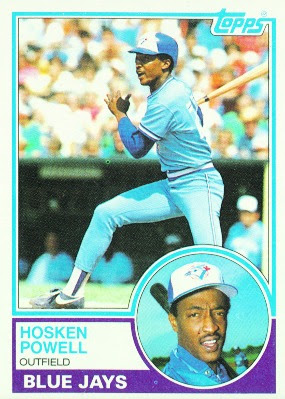 Card:  This is Powell's fifth and final Topps card.
Pic: Third card in a row with a sea of blue.
Player: Hosken Powell was a first round pick (9th overall) of the Twins in 1975.  In the minors he hit for high average and showed the ability to work a walk.  He made his debut as the left-handed platoon right-fielder for the Twins in 1978.  Powell never found his stroke and batted only .247 and power wasn't part of his game as he hit only three homers.  He had a little bit of speed which he used to steal 11 bags.
Powell spent April in the minors but then continued to platoon in right with Minnesota and batted .293 in '79.   He batted .262 with 14 steals in '80.  Powells production declined in '81 as he batted just .239/.286/.326.  The Twins had seen enough of their former first round pick and dealt him to Toronto for Greg Wells﻿.
Powell hit .275 with his new team but walked only 12 times in 280 plate appearances.  Powell was batting just .169 when the Blue Jays released him in July of '83.  Powell caught on with Vancouver, Milwaukee's AAA afilliate and played poorly there until his release in 1984. 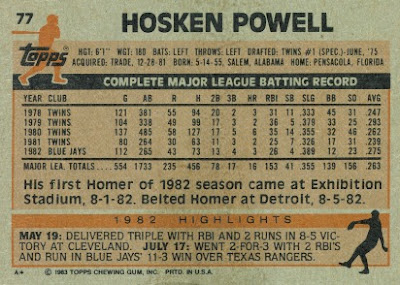 Flipside:  In the minors Powell walked frequently as well as hit but as you can see by his declining walk totals, pitchers weren't afraid to challenge the left handed Powell.
Oddball: Powell is the only player in MLB history with the first or last name of Hosken.
History:  Powell never lived up to the promise of a first round pick.  He was pretty one dimensional, relying on his ability to hit for average however he only hit over .275 once. His OPS+ in his career 84, 97, 77, 72, 82, 14 show that he didn't offer much at the plate.  Powell ran out of chances to prove he could hit and was out of baseball before he turned 30.﻿
﻿
Posted by Brandon at 8:14 PM