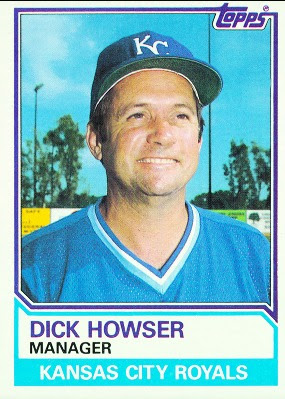 Card:  Dick Howser appeared on seven Topps cards as a player.  This is his first of five as a manager.
Pic:  Nothing exciting about these manager still shots, at least he's smiling.
Player:  Dick Howser played college ball at Florida State University before starting his pro career.  Howser was a shortstop for the Kansas City A's, Cleveland Indians, and New York Yankees.  He batted .280 in his first year and finished second in AL Rookie of the Year voting in '61 to Red Sox pitcher Don Schwall.  He was also named to the AL All-Star team.
After that, his play fell off and was a part time player the next two years.  Playing for the Indians in '64, Howser played in all 162 games and batted .256.  He again returned to a bench role and finished his career with the Yankees in '68.  In 1969, Howser was hired as the Yankee's third base coach, a position he held for ten years.
Manager:  Howser managed one game for the Yankees in '78 when he filled the gap between Billy Martin and Bob Lemon.  In '79 he returned to his alma mater to skipper the Seminoles.  He was only there one year however as the Yankees brought him back to manage the club.  The Yankees won 103 games during the 1980 season but were knocked out of the ALCS by the Royals.  Howser was not one to back down from Yankee owner George Steinbrenner which led to his dismissal despite the successful regular season.
When the Royals let Jim Frey go during the strike shortened '81 season, Howser took over and led the Royals to a second half division crown.  The Royals however were flushed by the A's in three games.  Howser guided KC to consecutive second place finishes in '82 and '83.
In '84 Howser managed a young Royals team to an 84-78 record, good enough to win the AL West.  The Royals were swept by the Tigers in the ALCS.  Howser had now been in the playoffs three times, but had yet to win a single game.
Howser and the Royals repeated as AL West winners in '85 with a 91-71 record.  The Royals knocked the Blue Jays out of the ALCS setting up an interstate match up against the St. Louis Cardinals.  The Royals fell behind two games to none before winning 6-1 in game three.  The Cardinals won game four to take a 3-1 series lead but the Royals would win the next three games to take the '85 World Series crown.
In the '86 All-Star game Howser managed the AL to a 3-2 victory over the NL.  It was only the third time the Junior Circuit had won since 1963.  It was during the All-Star break when Howser began feeling ill, and no one knew it would be the last game he would ever manage.  He was diagnosed with a brain tumor and stepped down as Royals manager.  After surgery, Howser attempted a comeback during spring training in 1987, but physically was too weak and handed the controls over to Billy Gardner.   Sadly, Howser never recovered and passed away June 17, 1987. 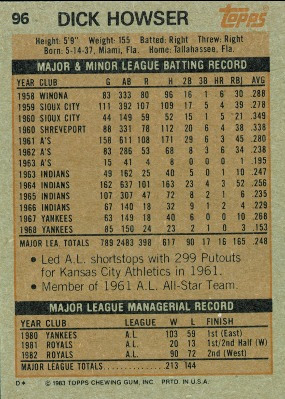 Flipside:  It was all or nothing with Howser's playing career.  Twice he played 158 games or more and the other eight years were 107 games or less.
Oddball:  Here is a glimpse into Howser's relationship with meddling Yankee owner George Steinbrenner: according to his Wikipedia page:

"....whenever Steinbrenner would call the manager's office before or after games while Howser was meeting with coaches or reporters, Howser would pick up the phone, say "I'm busy!", and hang up."

History:  Howser was beloved by Royals fans for bringing them a championship in '85.  In his six plus seasons as manager, Howser never finished the year lower than second place.
Howser earned the admiration and respect of many for his fight against the brain tumor that ended his life and career way too soon. 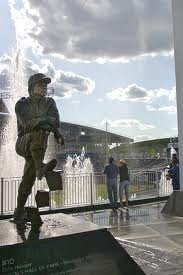 This statue of Howser was unveiled at Kauffman Stadium on April 10, 2009.