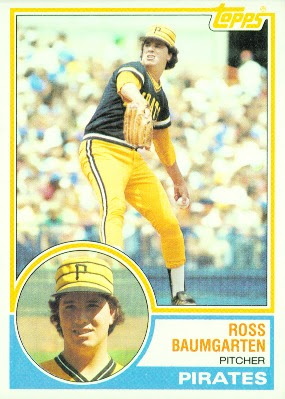 Card:  Baumgarten is shown here in his fifth and final Topps card.
Pic: Baumgarten pitched only 12 games for the Pirates and this looks like it was taken in Shea Stadium.  Therefore this photo was taken Aug 1, 1982.  Baumgarten was wild that day, yielding eight walks in 4.2 innings.  He also allowed five hits but managed to give up just two runs as the Bucs managed to win 4-3 in extra innings.
Player:  Ross Baumgarten was drafted by the White Sox in 1977 after playing college ball at the University of Florida.  The Illinois native made his MLB debut on 8/16/78, giving up two runs over six innings and earning the win over the Rangers.  Baumgarten pitched in six other games and ended the year with a 5.87 ERA.
Baumgarten earned a spot in the White Sox starting rotation in '79 and made 28 starts. The young lefty threw three shutouts and won 13 games with a 3.53 ERA.  He finished fourth in voting for AL Rookie of the Year behind co-winners Alfredo Griffin (2.3 WAR) and John Castino (1.7 WAR). Baumgarten with 3.6 Wins Above Replacement probably should have won the award.
The 6'1" lefty was a hard-luck pitcher for the offensively challenged White Sox in 1980.  Chicago averaged just 2.1 runs per start with Baumgarten on the hill and he finished with a 2-12 record despite a 3.44 ERA.   The highlight of his season was a one-hit shutout on July 2nd against the Angels.
Baumgarten struggled a bit in '81 as his ERA went up to 4.06 in 19 starts and was traded with Butch Edge to the Pirates in return for Vance Law and Ernie Camacho.  In '82 he broke some fingers on his pitching hand trying to field a line drive in late April and missed nearly eight weeks.  He struggled greatly with Pittsburgh, losing all five of his decisions and ending the year with a 6.55 ERA in 12 games.  The Pirates released him after the '82 season.
Baumgarten bounced around AAA with Oakland and Detroit in '83, but ineffectiveness and a shoulder injury convinced him to retire at age 28.
Stuff:  Fastball, cutter, curve, change up ﻿ 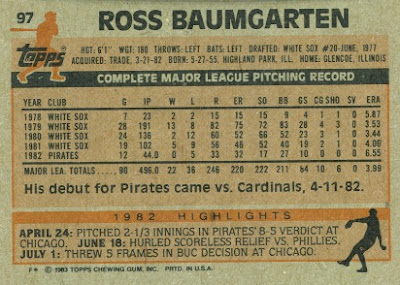 Flipside:  When a player has a rotten year as our subject did, it's hard for Topps to find appropriate highlights for the backside.  As example, Baumgarten gave up four runs in 2.2 innings of work in the April 24 game mentioned here.
Oddball:  Baumgarten and recent post subject John Castino were high school teammates.  As mentioned they were both top rookies in '79 and in the '80 Topps set they were featured back to back on cards #137 and #138.
History:  Baumgarten's career got off to a good start but faded after some early success.  He looked to have a promising future ahead of him but injuries derailed his career.  He retired with a 22-36 record with a 4.00 ERA (ERA+ 101).
Baumgarten made a smooth transition to the business world and is now a successful financial advisor.
Posted by Brandon at 7:20 PM