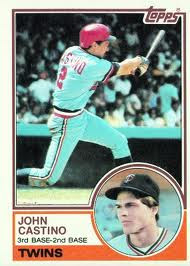 Card:  Castino appears here on his fourth Topps card.
Pic:  The pic seems a bit out of focus.  I like the sun reflecting off his helmet.  Like several cards in this set, Castino's uniform seems to blend into the background.
Player:  John Castino was drafted in the 3rd round in the 1976 draft.  Despite never having played past the AA-level, Castino made the Twins squad in 1979.  At first Castino was used mainly as a defensive replacement and started only six of the Twins first 31 games.  Before May was over, Castino had dislodged Mike Cubbage as the starting third baseman.   Castino showed good range at the hot corner, finished 2nd in the AL with 22 sacrifice hits, and batted .285.  The 24 year-old shared AL Rookie of the Year honors with Blue Jays SS Alfredo Griffin.
Castino built on his rookie year with a solid sophomore campaign in 1980.  Batting .302 with 13 home runs, Castino continued his sold defense at third and even started ten games at shortstop.  Despite his lofty average, Castino still was called on to bunt often, placing 2nd in the AL again with 21 sac bunts.   Castino led the AL with 9 triples in the '81 strike year but his average dropped to .268.
Castino experienced problems with his back in '82 which eventually led to a spinal fusion.   Splitting time between thirdbase and secondbase, Castino batted just .241 in 117 games.  After the surgery, the pain was lessened and Castino was able to play in 142 games, primarily at secondbase. He rebounded with a much better year with a .277/.348/.403 stat line.
Castino experienced more pain in '84 and was able to play in only eight games.  A second back surgery ended his career at age 29. 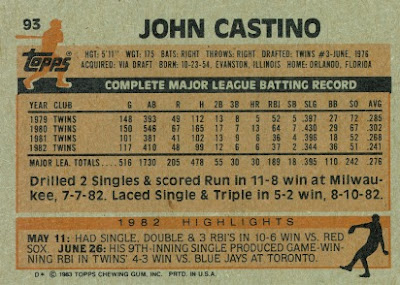 Oddball:  Castino retired at a young age due to injury. Comparing Castino's top ten comparable players through age 28 shows that if he had stayed healthy he would have likely played about five more years and amassed around 600 more hits.  Some of the more notable comparable players are Phil Garner, Ray Knight, and Mark Loretta.

History:  Castino was a hard nosed blue collar type player who played all out, all the time.  He found out after he began experiencing back pain that he had been born with a deft in his spine that was likely aggravated by diving around the ball field.  The Twins only finished over .500 once in his career (82-80 in '79) and he never got to play in the postseason.
Castino is currently an investment advisor.
Posted by Brandon at 6:23 PM