Here is Joe Torre's 2nd card as a manager.  He also had 16 cards as an active player.  Although just a close up, this card is much better than most posed managerial photos. 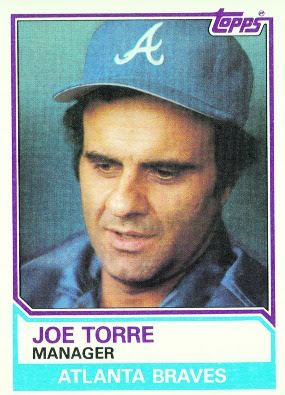 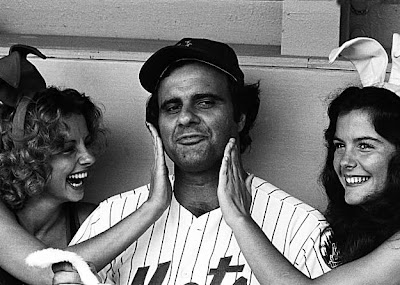 Who said Torre didn't enjoy his time with the Mets?
Torre was hired to lead the Braves and they won 13 straight games to start the ’82 season.  Atlanta went on to win 89 games and won the NL West but were swept out of the NLCS by the Cardinals.  Torre led the Braves to second place finishes the next two years and was fired following the ’84 season.
Torre spent the next five years as a broadcaster for the Angels and doing studio work for ESPN.  This stretch would be the only time span from 1960-2010 that he wasn’t playing or managing in the big leagues.
The Cardinals hired Torre to replace Whitey Herzog in 1990.  St.Louis went 24-24 under Torre and finished in 6th place.  The next three years the Cards won between 83 and 87 games but were not able to get higher than a second place finish.  The Cards finished under .500 in '94 and were struggling at 20-27 when Torre was cut loose in June of '95.
Torre was hired by the Yankees in '96, and after enduring some initial lack of confidence from the NY fans and media, he would lead them to a World Series title in his first year.  Torre was rewarded as AL Manager of the Year.  The Yanks were a Wild Card entry in '97 but lost a five game series to the Indians.
Under Torre's guidance the Yankees won an incredible 114 games in '98 and stormed their way to a championship, losing only two games in the postseason.  Torre won his second AL Manager of the Year award.  The Yankees continued their dominance the next two years winning World Series over the Braves and Mets.  Torre had led the Yanks to three consecutive titles and had won four of the last five World Series.
In 2001 Torre saw his team lose to the Diamondbacks in the Fall Classic in seven games. In 2002 they lost in the ALDS to the Angels.  Torre's crew lost the World Series in six games to the surprising Marlins in 2003.  The Red Sox shocked the baseball world by coming back from a 3-0 deficit to knock out the Yankees in 2004.  New York had won 100+ games each of the previous three years but had no rings to show for it.
The Yankees made the playoffs the next three years but were unable to get past the ALDS each year.  Unhappy with Yankee owner George Steinbrenner's one year contract offer, Torre packed his bags.
The Dodgers tabbed Torre as their new field general less than two weeks later.  Torre guided his new squad to an NL West division crown and an NLDS win over the Cubs but were unable to advance further.  The Dodgers had the best record in the NL in 2009 and defeated the Cardinals in the NLDS before failing in the next round.  During the 2010 season Torre announced it would his last year, and the Dodgers finished 80-82.
Torre managed for 29 seasons and had a 2326-1997 record.  His teams were playoff staples from 1996 to 2009.  Torre won six pennants and four World Series with the Yankees.   ﻿ 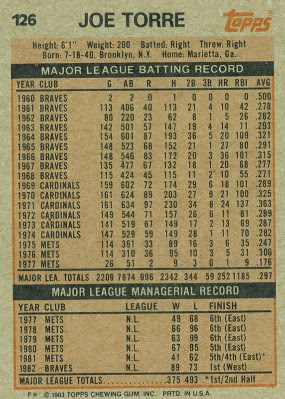 Flipside:  With his huge success as a manager, Torre the player is often overlooked.  He has some gaudy stats on the back of his card, something most managers lack from their playing days.
Oddball:  On his hair style Torre says "I call it the Watergate.  I cover up everything I can."  Click here for four more Torre quotes.
History:  Torre was at the helm for the Yankees revival and they won four titles with him in control.  His playing career was nearly Hall worthy and his managerial success will make him an easy selection.
Posted by Brandon at 3:34 PM