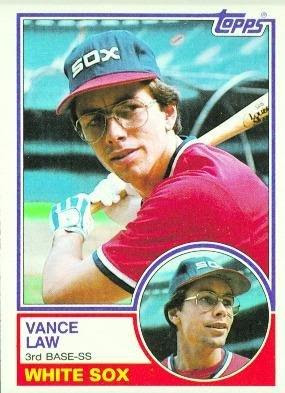 Card:  This is Law’s third Topps Card, his first as a White Sox, and his first solo card.  He shared a card in the ’81 and ’82 sets with fellow Pittsburgh Pirate prospects.
Although it lists Law as 3rd BASE-SS, he played twice as many games at SS.
Pic:  We get a good look at Law and his humongous spectacles posing during batting practice at Yankee Stadium.
Player:  Vance Law played college ball at BYU and was drafted by the Pittsburgh Pirates in 1978.  The 39th round draft choice was now a part of his dad Vern's former franchise.  Law debuted in the bigs in June of 1980 and was shuttled back and forth the rest of the year between Pittsburgh and AAA Portland.  He appeared in 25 games backing up at short and second base and batted .230.
Law made the Pirates out of spring training, but struggled to hit.  A slump, a labor-strike, and a trip back to the minors made it poor year for Law, as he batted .134 in 67 at bats.
Before the start of the '82 season he was traded to the White Sox for Ross Baumgarten (the subject of the last post).  Playing all over the infield, Law got into 114 games and batted a respectable .281 with 5 home runs.  Law was the everyday third baseman is for the AL West winning White Sox in 1983.   Under the heavier workload, Law's production dropped, as he batted just .243/.325/.348.  He played four games for Chicago in the ALCS but batted just 2-11 as the Orioles advanced.  Law broke out with some power in '84, hitting a career best 17 home runs while splitting time between third and second base.  In December, Law was traded to the Expos for Bob James.
With the Expos in '85, Law had a good year.  Although he hit just .266, he was very patient and worked 86 walks leading to a .369 on base percentage and 122 OPS+ in 147 games.  The next two years he played semi-regularly and batted .225 and .273.

Law signed as a free-agent with the Chicago Cubs in '88 and was the everyday third baseman.  Law responded with a .293 average and launched 11 homers and was chosen to the NL All-Star team.  His production declined in '89 as he hit .235 in 408 at bats.  Law was 0-3 in the Cubs postseason loss in the '89 NLCS.

Law played th 1990 season in Japan for the Chunichi Dragons.  He returned to the states in '91 and played for the Oakland A's.  The veteran struggled in his return, hitting a meager .209 in 134 at bats and decided to retire after receiving his release. 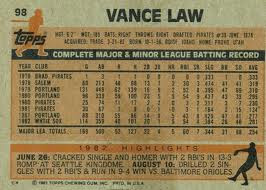 Flipside:  For a 39th round pick Law sure didn't spend much time in the minors.
Oddball:  You know by now that I love when position players pitch.  Law was no joke when he filled in on the mound SEVEN times during blow outs in his career.  In those games Law pitched 8 innings and allowed just three runs.  I'm sure Pa Law was proud.
Willie Stargell and Manny Sanguillen were teammates of both  Vern and Vance Law.
History:  Law had a nice career playing for a late round pick.  He played for five major league teams and split his time between second and third base.  He finished his career with 76 homers and a .256 batting average.
After his playing career, Law moved into coaching.  He has been the head coach at BYU since 2000.
Posted by Brandon at 9:00 PM