This is Preston Hanna’s 4th and final Topps card.  Hanna spent the first half of the season with Atlanta, so kudos to Topps for getting this pic of him as an Athletic.  Oddly, Hanna had pitched in the majors in parts of four seasons before he made his first appearance in a Topps set in 1979.  The color pink has no business on a baseball card. 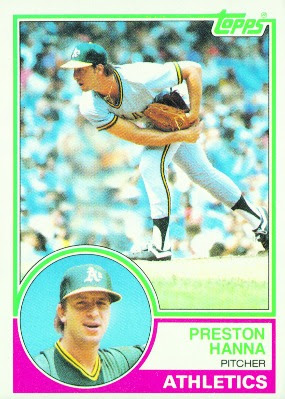 Player:  Preston Hanna was a first round pick of the Braves in the '72 draft.  Despite less than stellar stats in the minors, Hanna moved up steadily through the Braves system.  He made cameos with the big team at the tail end of the '75 and '76 seasons totaling 13.2 relief innings.
Hanna was a mid-season call up in '77 and pitched in 17 games, starting nine of them.  He won two and lost six with a 4.95 ERA across 60 innings.  Hanna pitched in Braves rotation in '78 with poor results.  He averaged less than five innings a start and walked more (93) than he struck out (90).  He finished with a 7-13 record and a 5.13 ERA.
The right-handed hurler missed most of '79 with an injury that limited him to 24.1 innings.  Hanna pitched in a mop up role in 1980 and had his best year.  He pitched in 32 games with a 3.18 ERA in 79.1 innings.  Injury and ineffectiveness (6.37 ERA) dogged Hanna in '81 as he was limited to just 35.1 innings.
At first glance it appears that Hanna was enjoying a rebound year in '82 with a 3-0 record and a 3.75 ERA in 36 innings for the Braves.  However a look at his WHIP of 1.778 and his 28/17 walk to K ratio reveals the truth. The 27 year-old former first round pick had run out of chances in Atlanta and they released him on July 6.  Picked up by the A's, Hanna continued to get hit hard, posting a 5.59 ERA over the rest of the season.
Hanna tried to make it back to the big leagues but scuffled in two tries with AAA teams in '83.  He retired with 17 career wins over eight seasons.  ﻿ 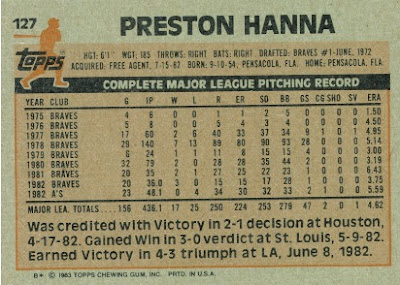 Flipside:  Hanna's complete game in '82 came against the Red Sox on 8/31.   He pitched eight innings in the 4-0 loss after throwing three innings two days prior.
Oddball:  Hanna finished his career with 26 more base on balls allowed  than strikeouts.  This just doesn't happen very often.
History:  Hanna was a first round pick who never lived up to that draft position.  He struggled in almost every season in the majors posting 1.6+ WHIP in seven of his eight seasons. ﻿
Posted by Brandon at 6:45 PM