Don Sutton is shown here on his 18th Topps card.  He spent most of the year as an Astro before coming to the Brewers in a late season acquisition.  Big props to Topps for capturing Sutton in one of the seven games he pitched for Milwaukee in '82.  This was likely taken on September 12, against the Yankees, one of two day games he pitched on the road as a Brewer.  I wonder if we will ever see another ball player sport a graying white-man-afro? 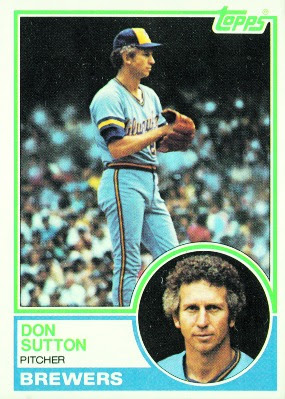 Player:  Don Sutton was signed by the Dodgers in September of 1964 and spent the next year in the minors.  He debuted the next year amid a star studded rotation featuring Sandy Koufax, Don Drysdale, and Claude Osteen.  Sutton held his own, winning 12 games with a 2.99 ERA and 1.081 WHIP.  He didn't see the light of day in the World Series as his savvy teammates got the starting assignments.  Unfortunately for Sutton and the Dodger blue, the Orioles swept the series.
The sophomore jinx got to Sutton in '67 as his ERA climbed to 3.97 (78 ERA+) and at 11-15, his record reflected his slump.  He improved in '68 reducing his ERA to 2.60 (106 ERA+) but he ended up with the same 11-15 record.   Sutton won 32 games over the next two seasons with slightly above league average ERAs.
Sutton would prove to be extremely durable and consistent, a hallmark of his lengthy career.  From '71 though '82 he would average 16 wins, with a 2.89 ERA and 1.084 WHIP over that span.  From '72 to '76 he finished either 3rd, 4th, or 5th in Cy Young voting.
Sutton pitched in the '74 and '77 NLCS and World Series, and was 5-0 with a 2.13 ERA but came away empty both times.
The Dodgers repeated as NL West champs in '78 but this time around Sutton was hit hard, losing all three of his playoff starts as New York sent LA home empty handed the second year in a row.
After the 1980 season, the free-agent Sutton signed with the Astros.  He won 11 games in the strike shortened season and led the NL in WHIP for the fourth time.  He was unable to help the Astros in the postseason because a line drive shattered his knee cap in the last week of the season.  He returned as his reliable self in '82 and was cruising along as usual when he was dealt to Milwaukee for Kevin Bass, Frank DiPino, and Mike Madden.  The Brewers acquired the veteran to add pitching to a talented offensive team.  Sutton did his job going 4-1 down the stretch to finish with 17 wins on the year.  He was effective in the ALCS earning the victory in Game 3 against the Angels.  The Cardinals however slashed him for 11 runs in two starts.  Sutton had been to five World Series and his team came up short every time.
Now 38 years old, Sutton showed signs of slowing down in '83 as he won just eight games with a 4.08 ERA.  It was the first time in his career he had won less than eleven.  He was more effective in '84 winning 14 games with a 3.77 ERA.  Before the '85 season Sutton was dealt to Oakland for Ray Burris.  He spent most of the year with the A's but was traded again to the Angels in September for a pair of career minor leaguers.  Sutton finished the year with familiar stats: 15 wins in 226 innings.
The following year on June 18, Sutton won game number 300 of his career.  He threw a complete game three-hitter, as a home run by Pete Incaviglia was the only run Texas could muster against the 41 year-old junk baller.  In typical fashion Sutton needed just 85 pitches to defeat the Rangers.  Sutton's '86 stats were nearly identical to his prior season as he won another 15 games with a similar ERA (3.77/3.86).  The Halos won the AL West, giving the aging Sutton another shot at the playoffs.  He gave up one run in a Game 4 no-decision that the Red Sox eventually won in eleven innings.  He also gave up a run as he tried to hold the fort in Boston's lopsided Game 7 win.
Sutton was hit hard in '87 but went 11-11 in spite of a 4.70 ERA in 34 starts.  He signed with the Dodgers for the '88 season and was 3-6 with a 3.92 ERA when he was released in August.  His career was over and the Dodgers went on the win the World Series without him.  In 23 seasons he compiled a record of 324-256, 3574 strikeouts, and a 3.26 ERA (108 ERA+).
Stuff:  Curve, fastball, slider, screwball, change, scuffball ﻿ 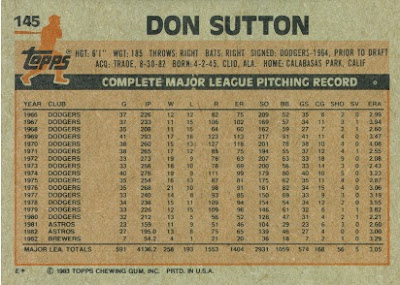 Oddball:  Sutton was a consistently poor hitter, hitting over .200 just once in his career.  In 1,235 career at bats he never homered, and hit just fifteen doubles and one triple.

Sutton and Dodger teammate Steve Garvey once had a locker room brawl that was instigated by some less than kind remarks about Garvey's image.

History:  Sutton certainly won a ton of games in his long career.  He was elected to the HOF in 1998 in his fifth year of eligibility.  Sutton is sometimes looked as a "compiler", someone who played so long their career totals are bound to be impressive.  He had a nice peak in the early 70's followed by a decade of very good pitching that often was at or near All-Star level (see graph below).  He was ejected from a 1978 contest for scuffing the ball and it is widely admitted by everyone but Sutton that he doctored the ball throughout his career.

After he was done playing, Sutton moved into the broadcast booth working for the Braves from '89 to '06.  He then worked on Washington Nationals TV for a couple of years before returning to Atlanta to work on radio broadcasts.