The first checklist in the set, it lists cards 1-132.  For kicks I will put together an All-Star team from the cards listed here...just base cards.  I'm not including record breakers or players pictured on team cards.  Feel free to comment on the selections listed below. 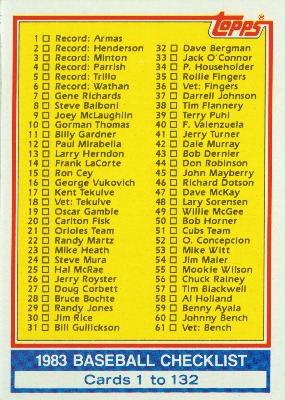 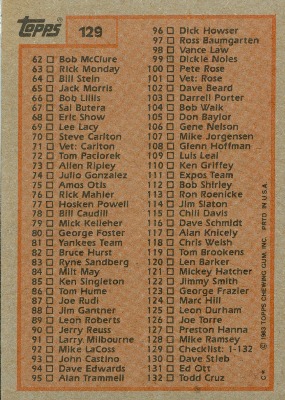 1B: Pete Rose.  The versatile all-time hit king could have been pegged for several different spots but first base is where he is needed most on this team.
2B: Ryne Sandberg
SS: Alan Trammell
3B: Ron Cey
Middle Infield:  Jim Gantner
Corner Infield:  Bob Horner
Utililty:  Tom Brookens over Tim Flannery, Vance Law, and Jerry Royster....why...well because I once met Brookens and I have never met the other guys.
C: Johnny Bench wins a tight battle over Carlton Fisk.  With Bench starting and Fisk in reserve, there is no room for Darrell Porter.
OF:  The outfield is talented and with plenty of options.  Jim Rice, George Foster, Amos Otis, Willie McGee, Chili Davis, Ken Griffey, Gorman Thomas.
I'll start Rice in LF, Otis in CF, with a Griffey/Foster platoon in RF.  I'll keep McGee around as defensive sub/pinch runner.
DH:  A very deep pool of DH's...Ken Singleton, Hal McRae, Don Baylor and Chili Davis all merit consideration.  Lets look at oWAR as a quick measure of offensive career value and three best single seasons.
Singleton: 46.6 career / 6.9, 5.7, 5.6
Davis: 39.3 career / 5.4, 3.8, 3.5
Baylor: 33.6 career / 5.8, 3.6, 3.4
McRae: 27.6 career / 5.0, 4.3, 3.9
Singleton comes out on top and it wasn't as close as I thought it would be.
The pitching staff is loaded:
SP:  Steve Carlton, Dave Stieb, Jack Morris, Fernando Valenzuela are the top four starters.  Jerry Ruess edges out Bruce Hurst, Bill Gullickson, Mike Witt and Randy Jones for the 5th starter spot.
Bullpen:  Ace Rollie Fingers is set up by Kent Tekulve. The pen is rounded out by Bill Caudill, Doug Corbett and lefty Al Holland.
Starting lineup:
1. Rose 1B
2. Sandberg 2B
3. Singleton DH
4. Bench C
5. Rice LF
6. Cey 3B
7. Griffey RF
8. Otis CF
9. Trammell SS
Manager: Joe Torre, although I was tempted to go with Dick Howser.
It will be interesting to see how the other checklists stack up to this squad.  What do you think of this team?
Posted by Brandon at 4:20 PM