This is Mike Caldwell’s 11th Topps card and it looks very similar to Jim Slaton’s card #114. Both cards were taken in Tiger Stadium, with the pitchers pictured in what I call the empty fist pose. 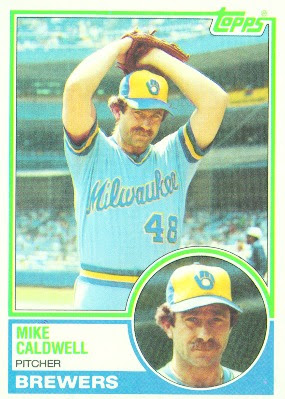 Player: Mike Caldwell was a ready made pitcher when he was drafted by the Padres out of North Carolina State in 1971 . He spent just 19 games in the minors before arriving on the scene later in the year. He relieved in six games, earned his first win, and didn't allow a run in 6.2 innings.
The young lefty spent the next two years bouncing between the pen and rotation. Each season he was more effective as a reliever with ERAs of 3.05 and 3.09 in that role while as a starter his ERA jumped up to 4.27 and 4.28. Pitching for poor Padre teams, Caldwell was hung with a combined 12-25 record over the '72 and '73 seasons while saving 12 games along the way.
After the '73 season the Padres traded Caldwell to the Giants for Willie McCovey and Bernie Williams. In San Fran, Caldwell would open eyes in '74 with a 14-5 record and a 2.97 ERA (ERA+ 130) in 189 innings. He had elbow surgery in the off season and as 1975 unfolded he was unable to duplicate his prior year's success. He was hit hard and demoted to the pen in July and finished the disappointing year 7-13 with a 4.79 ERA. After trying Caldwell again in the rotation, the Giants moved him back to pen in '76. He struggled all year, posting a 1-7 record and a 4.86 ERA.
Caldwell was dealt to the Cardinals in a six-player deal in October of '76 and was flipped to the Reds for Pat Darcy the next spring. Caldwell pitched in middle relief for the Reds and was decent in 14 games before he was traded for the third time in eight months. This deal sent him to Milwaukee for two players who never cracked the majors. The Brewers tried him as a starter but he was ineffective in that role and ended the year back in the pen. His combined stats in Caldwell's whirlwind year show a 4.46 ERA over 119 innings.
As the Brewers prepared for 1978, nothing about Caldwell's previous performance could have predicted the year he would have. The six-foot lefty started the year in the pen but he would join the rotation in late April. All he did was anchor a staff badly in need of an ace, and help the franchise to their first winning season as the Brew Crew finished in third place with 93 wins. Caldwell won 22 games, logged an amazing 293 innings, and completed a league best 23 games. He wasn't just eating innings either as his 2.39 ERA and 1.064 WHIP indicate the leagues inability to make solid contact against him. For his dynamic career turnaround Caldwell was named AL Comeback Player of the Year and finished second in Cy Young voting to Ron Guidry.
Although not as dominant as the year prior, Caldwell was solid in '79 posting a 3.29 ERA over 235 innings. He won 16 against only 6 losses. He was pretty average the next two years with ERA's of 4.03 and 3.93 but he had a good offense behind him. The Brewers made the postseason for the first time in '81 and faced the Yankees in the ALDS. Caldwell was the losing pitcher in Game 2 as NY won the series in five games.
With Harvey's Wallbangers backing him, Caldwell won 17 games in '82. His 3.91 ERA was again around league average and he was a rock for Milwaukee logging 258 innings. After losing his only start in the ALCS, Caldwell responded by shutting out the Cardinals, allowing just three hits in Game 1 of the World Series. He was also the winner in Game 5 as the Brewers took a 3-2 lead in the series. He was called upon to pitch in relief in Game 7. Pitching on two days rest after facing 40 batters in Game 5, he was unable to put out the fire and the Cards went to win it all.
Caldwell was very hittable the next two years with ERA's of 4.53 and 4.64 as he was no longer fooling hitters. Never a strikeout pitcher, he struck out only 92 batters over the '83 and '84 seasons in 354 innings. The 35 year old Caldwell retired with a career mark of 137-130 and a 3.81 ERA (99 ERA+) over 14 major league seasons.
Stuff: Sinker, slider, fastball, curve, change. Accused of throwing a spit-ball especially after his out-of-no-where improvement in '78. 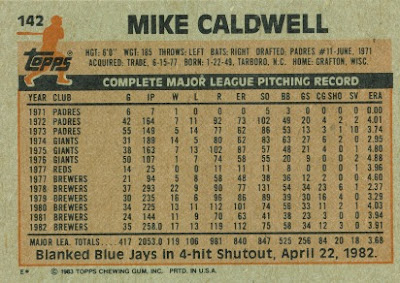 Flipside: Caldwell was quite the workhorse between '78-'82. Even with the strike shortened '81 season he averaged 231 innings over that span.

Oddball: Caldwell was one of the three left-handed Mikes to hand Ron Guidry his only three losses in '78. The other guys were Mike Flanagan and Mike Willis.

Like many players of his day, Caldwell was a prankster. Once while teaming with Reggie Cleveland, he locked Bob McClure in Milwaukee County Stadium's bullpen outhouse by tying the doorknob to the flagpole. McClure got the pair back when he snuck a filthy pig into the duo's hotel room. The pig proceeded to trash the room while McClure listened from across the hall. When he checked on them the next morning the room had been cleaned and Caldwell had the pig in a dog collar and was feeding it french fries. A partial story of the wild prank can be found here.

History: Caldwell was the proverbial crafty lefty. He relied on his sinker to induce ground balls and dropped his three-quarter delivery to near side arm against lefties. Caldwell's career was marked by his dominant '78 season and his '82 World Series performance.

Since '87, Caldwell had bounced around the minors as a pitching coach making stops with nine different teams. He is currently the pitching coach for the Arizona League Giants