This is Mark Wagner's sixth Topps card and is the third card in a row to feature a non-game-action shot.  Topps gets it right with the blue and red borders matching the Rangers road uniforms perfectly. 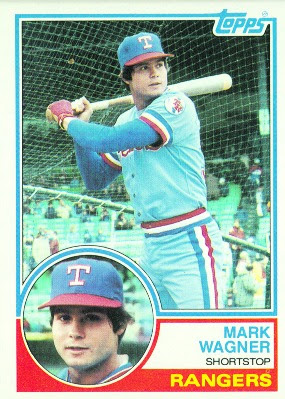 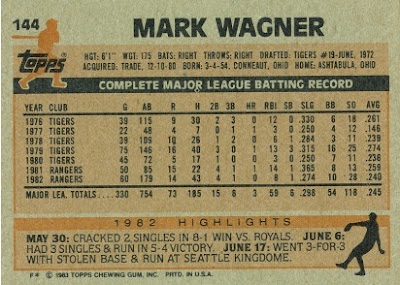 Flipside:  I dislike the shadow figure used on the back of some of these cards.  This one looks like a drunken pitcher.  Not sure how that correlates to a back-up infielder.
Oddball:  In tracking Wagner's career, I'm not sure what happened in 1983.  He played the previous two years with Texas and played two games for them in June of '83.  As I mentioned earlier he spent the rest of the year in AAA, but he spent 36 games playing with the Tigers organization in Evansville.  Then he is listed as being granted free agency by Texas in November.  Maybe Texas loaned him to Detroit, I'm not sure.
When Wagner was working as a first base coach at AA Chattanooga in '97, he was pressed into service when the team suffered a player shortage due to injuries and player promotions.  The 43 year-old got into two games and had one hit in four at bats.
History:   Wagner was at one time thought to be the shortstop of the future in Detroit but was supplanted by Alan Trammell.  He never really got a chance as a full time player.  His defense was adequate and he didn't hit enough to warrant more playing time.  According to Baseball Reference, two of his closest comparable players are Onix Concepcion and Mike Ramsey, both players that have been featured on this blog.
Posted by Brandon at 8:20 PM