Topps had a hard time catching Joe Pettini in action which is understandable since he played only 29 games in 1982.  This is Pettini's third card and much better than his freaky rookie card from the '81 set. Although listed as SS-3rd Base, he played exactly two innings at the hot corner in '82. 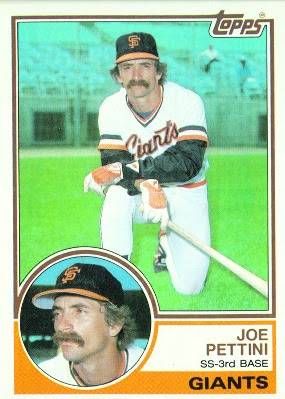 Player:  Joe Pettini was a utility infielder who made his way to the big leagues despite being skipped over in the draft.  After leaving Mercer University, Pettini signed a deal with the Expos in '77 and hit .304 at three levels of minor league action.  By 1979 he reached AAA where he hit .294.  Over the winter the Expos sent him to the Giants as the player-to-be-named-later to complete an earlier deal for John Tamargo.
With the Giants, Pettini started 1980 in the minors but made his debut in July.  He received regular playing time at shortstop while also appearing at third and second.  He launched his only career home run on 7/23 off Willie Hernandez in his 12th career game.  He finished the year with a stat line of .232/.295/.274.  The Giants may have over estimated his ability to handle shortstop, as his range factor at short (4.13) was well below league average (5.02).
Pettini didn't make the Giants out of spring training in '81 but was called up a month later.   He was used as a defensive replacement but did not perform well in that role.  While coming in at times for Rennie Stennett and Joe Morgan at second base he fielded .920 with sub-par range.  He also was used occasionally as a late inning replacement for Johnnie LeMaster with similar results.  In 12 games at shortstop he fielded at a .870 clip.  He also made one error in eight chances at thirdbase.  When he got the chance to bat, he didn't exactly make up for his poor defense.  In 29 at bats he managed two hits.
Not surprisingly, Pettini spent most of '82 in the minors.  When he was up with the Giants, he hit .205 in 39 at bats, which makes him an odd selection to appear in this set.  Pettini would spend the entire '83 season with the big league team.  He was again used as a defensive sub, pinch runner, and occasional pinch hitter.  He batted .186 in 86 at bats.
Pettini spent the rest of his career in the minors playing at AAA Phoenix and Louisville through the '86 season.
﻿ 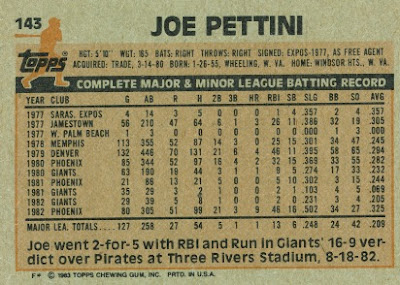 Flipside:  Pettini had one other two hit game on 8/23 when he went 2-3 with a walk.
Oddball:  Pettini was the shortstop on a line drive 4-6-3 triple play hit by Dave Cash on 10/3/80.
History:  Pettini was a bit overmatched as player "earning" negative 1.9 WAR in his brief time in the majors.  He is much better known for his role as a bench coach for the Cardinals than his playing career.  He managed for eight years in the Cardinals chain and then won World Series rings as the bench coach on Tony LaRussa's staff in 2006 and 2011.  He now holds the same position for the Astros on manager Brad Mills' crew.
Posted by Brandon at 12:54 PM