Dave Stieb is pictured here on his fourth Topps card.  If this pic was taken in '82 like most of the shots in this set, then this was taken on 7/24 against the White Sox in Chicago's old Comiskey Park.  Stieb went 5.1 innings and allowed one run to earn the win. 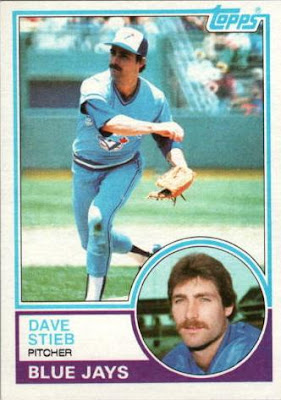 Player:  Dave Stieb was primarily used as an outfielder in college but after being drafted by the Blue Jays in '78 he made a quick transition to pitcher.  With just 19 minor league games under his belt, Stieb debuted with Toronto on 6/29/79.  He would stay in the rotation the rest of the season, winning eight games with a 4.31 ERA in 129 innings.
In 1980, Stieb emerged as a top starter capable of a heavy workload.  He made 32 starts, logged 242 innings, and completed 14 games.  Despite a 3.71 ERA, his supporting cast didn't help him out much leading to a 12-15 record.  He was recognized around the league and was rewarded by being named to the first of seven AL All-Star teams.  Stieb continued to improve in '81 by lowering his ERA to 3.19.  He won 11 games in the strike-shortened year and led the AL with 11 HBP.  He would go on to lead the league four more times in this category, the result of a tailing four-seam fastball that he wasn't afraid to throw inside to right-handed hitters.
Stieb kept up his stellar performance the next four years averaging 16 wins and 275 frames.  He never had the big eye-popping win totals and thus never finished higher than 4th in Cy Young voting.  The Jays won Stieb's first two postseason starts in Games 1 and 4 of the '85 ALCS against the Royals.  Stieb however was touched for six runs in Game 7 and took the loss.
Stieb led the AL in ERA (2.48) in '85 but saw that almost double to 4.74 in '86.  His record dropped to 7-12 and he completed only one game in '86.  In the offensive filled '87 season his 4.09 ERA wasn't too shabby and he posted a record of 13-9.
Stieb was no longer the workhorse he was in the early 80's but over the '88-90 seasons Stieb averaged 17 wins with a 3.11 ERA.  Stieb had an excellent year in '88 winning 16 with a 3.04 ERA.  He lost no-hitters with two outs in the ninth in back to back starts to end the '88 season.  In his second start of '89 he carried a perfect game through 26 batters before allowing a double.  He finally nailed down the well deserved no-hitter on 9/2/90 against the Indians.
Stieb struggled with back and shoulder injuries the next two years making only 9 starts in '91 and 14 in '92.  He was on the DL for the last 8 weeks of the  '92 season and watched his teammates win the World Series from the sidelines.  Toronto released him after the season and he signed with the White Sox.  He made four starts for the White Sox in '93 but was not effective and was released.  Three weeks later he signed with the Royals but struggled in eight AAA starts and was released.
Stieb retired for four years and made a surprising comeback in '98.  Pitching mainly out of the pen, he recorded a 4.83 ERA in 50 innings and retired for good.  In 16 seasons Stieb won 176 games with a 3.44 ERA.
Stuff:  Slider, 4-seam fastball, 2-seam fastball, curve, change 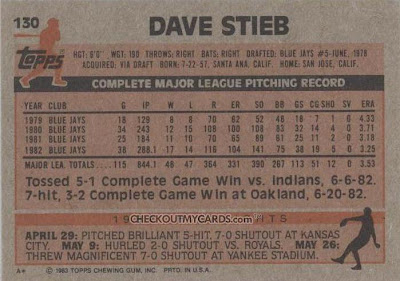 Flipside:  On 9/16/82, Stieb pitched 11 innings, allowed three hits, and one run and received the no decision against the Angels.  The Blue Jays pushed across a run in the top of the 12th giving Toronto a 2-1 win.
Oddball:  Stieb played an inning of left field in a 15 inning 7-5 loss to the Twins on 8/28/80.  Manager Bobby Mattick ran out of position players and tabbed the former college outfielder to play leftfield.  He also batted and flew out to CF in his only at bat.  He would have to wait 18 years for his next at bat, a groundout in an interleague game.
History:  Stieb had a great career that could have been outstanding had it not been for a career changing injury.  The back injury came as a result from a collision while covering first base in '91.  He never really was the same afterwards.
While Jack Morris won more games in the 80's (160 to Stieb's second place 143), Stieb lead all MLB pitchers in WAR for the decade with 45.2.  Stieb's dominance over the decade is discussed in this great article at highheatstats.com.  ﻿
Posted by Brandon at 7:27 PM