Veteran hurler Jim Barr is shown here on his 11th Topps card.  Another bright picture, I'm guessing it was a spring training shot. 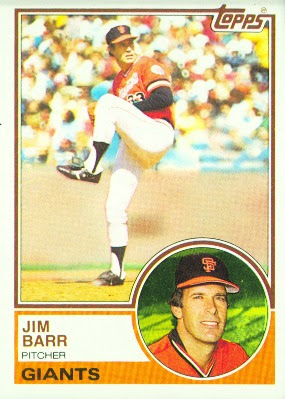 Player:  After a successful collegiate career at USC Jim Barr was drafted in the 3rd round by the Giants in 1970.  He debuted just over a year later on July 31, 1971.  Barr pitched in middle relief for the Giants logging 35 innings with a 3.57 ERA.  He made the postseason roster and pitched one inning and allowed a run in his only appearance in Game 2 against the Pirates.

Barr started '72 in the pen but was in the rotation by July. He totaled 179 innings with a 2.87 ERA.  Over the course of two shutout starts in August, he set a major league record by retiring 41 consecutive batters.  The record has since been surpassed by Mark Buehrle.

Despite his success the year prior, Barr started '73 in the pen.  By May had worked his way into the starting staff.  He logged 231 innings, but had a hard luck 11-17 record despite a league average 3.81 ERA.  He would settle into quite a dependable pitcher over the next three years, with at least 239+ innings, 13-15 wins with an ERA+ of 125 to 139.   Barr finished in the NL's top ten ERA leaders all three years.

Barr signed as a free-agent by the Angels in '79, but struggled with his new team going 10-12 with a 4.20 ERA.  He returned in '80 as a long reliever and spot starter.  Ineffectiveness limited him to 68 innings with a 5.56 ERA.  Barr was released by the Angels in spring training of '81.  He spent all of the '81 season with AAA Edmonton, the White Sox top farm club.  Oddly both Barr and Todd Cruz (the subject of the previous post) missed the entire '81 season while toiling at Edmonton. 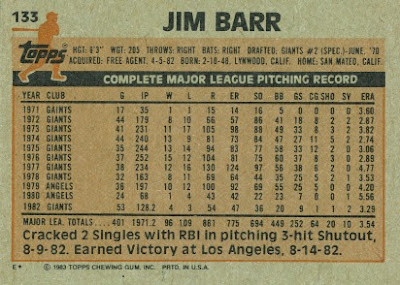 Flipside:  Barr had great control and pitched to contact as you can see in his strikeout totals.  He never K'd more than 97 and never walked more than 60.  He finished in the NL's top ten in BB/9 innings every year from '72 - '78.  Barr also had a nice streak of two or more shutouts over that same span.
Oddball: Barr was a good athlete and was used 27 times in his career as a pinch runner.  He was two for two in lifetime steal attempts.
History:  Barr had a solid run in the 70's and would have been more well known on a better team.  Despite his individual success he never made an All-Star team or received any Cy Young votes.  Barr kept pitching in amateur leagues into his 40's and was the pitching coach at Sacramento State for 16 years.
Posted by Brandon at 3:40 PM