Todd Cruz looks like he's taking part in a pre-game drill.  This is his third Topps card.  It would look a lot better if Topps had used a bright blue order instead of the hot pink, but hey, it was the 80's. 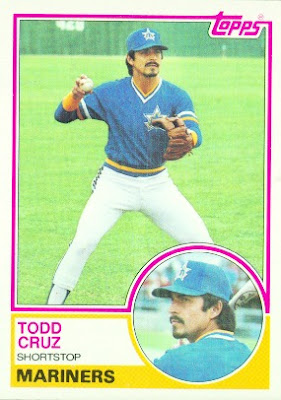 Player:  Todd Cruz was a shortstop drafted by Philadelphia out of the Western High (Detroit) in 1973.  He batted only four times for the Phils in a debut cup of coffee in ’78.  Before the start of the '79 season he was sent to Kansas City in exchange for Doug Bird.  Cruz spent '79 as a backup for the Royals hitting .203/.224/.314 in 126 plate appearances.

In 1980 the Royals sent Cruz packing in a five player deal that saw him land on the west coast with the Angels.  He was not there long though as they sent him to the White Sox in June for Randy Scarbery.  After riding the pine in KC, Cruz was starting every day at short for the ChiSox.  He ended the year hitting .237 with three homers in 333 at bats.

To say Cruz had a dismal year in 1981 would be an understatement.  In spring training, he lost his starting job to Bill Almon.  Then a back injury led to a lengthy stay on the DL.  While north of the border rehabbing with AAA Edmonton, he was arrested for theft after breaking into a Hudson’s Bay department store.  He was placed on nine-month probation for his poor behavior.  It was fitting as he was just 9 for 24 in lifetime steal attempts.  With all his troubles, he never appeared in the majors in '81.
The White Sox sent Cruz, Rod Allen, and Jim Essian to the Mariners for Tom Paciorek.  Cruz was the starting SS for Seattle in '82 and set a career high with 16 HR.  Unfortunate-ly he didn't get on base much 230 BA /.246 OBP.
He returned as the starter in '83 but was hitting .190 in June when he was sold to the Orioles.  In Baltimore, Cruz was used at third base as a part time starter and defensive replace-ment.  He hit slightly better with the O's but his overall average was sub-Mendoza at .199.  Cruz struggled with the bat in the postseason (4-31), but it didn't matter as the Orioles won the World Series over the Phillies.

Cruz was very good defensively with a strong arm and excellent range.  Teammate Cal Ripken spoke glowingly of how much ground Cruz covered at third.  Of course putting a good defensive shortstop at third should result in good defense.  The problem was Cruz hit so little it canceled out his defensive value.  Used mainly as a defensive sub, he hit .218 in 154 plate appearances in '84.  Cruz spent the next three years in the minors trying to work his way back, but he never did.  He retired after another comeback attempt in '91 with a line of .220/.251/.333 in 544 major league games. 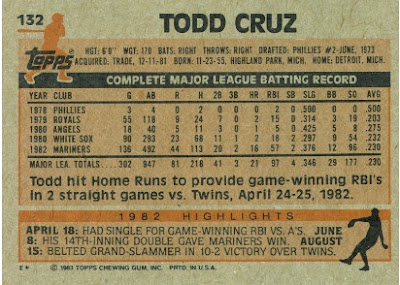 Flipside:  Check it out, Cruz pulled off the ignoble feat of walking less (12) than he homered (16).
Oddball:  Cruz was noted for his arm strength and was called upon to pitch four times in the minors and once in the majors.  Totalling six shutout innings, he K'd eight batters and walked only two.
History:  Cruz was a strong defender but lacked the ability to get on base.  He was a charismatic fellow who was well liked by his teammates.  With the championship Orioles, the weak-hitting bottom of the batting order of Rick Dempsey, Rich Dauer, and Cruz was nicknamed the Three Stooges.
Sadly Cruz passed away in 2008.  He apparently drowned in his pool after a possible heart attack.  ﻿
Posted by Brandon at 8:02 PM