This is a nice shot of Rick Dempsey wearing the tools of ignorance.  You don't see too many catchers wearing a hat under their helmets these days.  This is Dempsey's 11th Topps card. 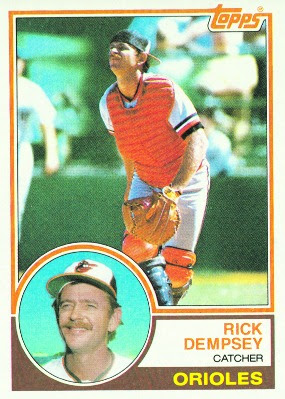 Player:  Rick Dempsey debuted with the Minnesota Twins ten days after his 20th birthday in September of 1969.  Over the next three years, the former 15th round pick would be shuttled back and forth to the minors, appearing in only 41 major league games in his first four years.
After the '72 season he was traded to the Yankees for Danny Walton, but he only got into six games for the Yankees that season, spending most of '73 at AAA Syracuse.  Dempsey finally earned a roster spot in '74 as Thurman Munson's back up. He spent the next two and half seaosns in this role batting .239 in '74 and .262 in '75.  While struggling with a .119 average in June of '76 he was sent in the ten-player blockbuster trade that sent Tippy Martinez, Rudy May, Scott McGregor and Dave Pagan to the Orioles for Doyle Alexander, Jimmy Freeman, Elrod Hendricks, Ken Holtzman and Grant Jackson.  Dempsey batted .213 for his new team in 174 at bats.
Dempsey would find a home in Baltimore as he spent the next ten seasons as an Oriole.  In 1977 he batted .226 in 270 at bats but led the AL in caught stealing percent for the second year in a row (53.4 and 57.7).  His strong defense was valued by manager Earl Weaver and Dempsey played a career high 136 games in '78.  He batted .259/.327/.356 and continued to show a strong and accurate arm behind the plate.
Dempsey's rate stats went down some in '79 but he was strong in the postseason batting .400 in the ALCS and .286 in a losing effort against the World Champion Pirates.  He batted .262/.333/.425 in 1980 and posted a 108 OPS+ and career best 3.2 WAR.  He batted .215, .256, and .231 over the next three years averaging five long balls per season.  After a 2-12 ALCS against the White Sox, Dempsey excelled in the '83 World Series.  He hit a home run, four doubles, and batted .385 to earn series MVP honors as the O's won it all.
Perhaps spring boarded by his postseason success, Dempsey, now in his mid-thirties, would hit double digit homers the next three seasons with totals of 11, 12, and 13. His new found pop must have given him a small amount of respect from AL pitchers as his walk rates climbed as well helping him to a .323 OBP from '84-'86. He was a free-agent after the '86 season and signed with the Indians.  He had a poor year in Cleveland batting just .177 in 141 at bats.
Dempsey spent the next three years as a Dodger, backing up Mike Scioscia. His average was south of .200 two of those years but he won another World Series ring with the '88 squad.  Now 41 years old, Dempsey signed with the Brewers in '91 and was a decent reserve, batting .231 with four homers in 147 at bats.  He found himself without a team in '92 but was called upon as catching insurance twice during the year by the Orioles.  He had one hit in nine at bats and retired.  Dempsey appeared in 24 seasons and played in four decades with a career line of .233/.319/.347. 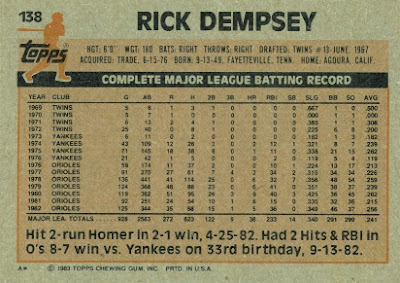 Flipside:  Dempsey had quite an odd career.  Looking at the first eight years in the league he batted just 547 times with three homers.  Hardly the recipe to start a 24 year career.
Oddball:  Author Daniel Okrent describes Dempsey the best in his book Nine Innings: Anatomy of a Baseball Game

He was an intense man, who concentrated mightily on the game. For relief from baseball pressures, he would take it upon himself to be the club entertainer. The son of two former vaudevillians, he had a knack for performance, and was particularly renowned for his 'Baseball Soliloquy in Pantomime.' It was a comic turn he'd occasionally perform during rain delays, stuffing his uniform with padding and prancing around a soggy tarpaulin performing exaggerated parodies of hitters, pitchers, umpires. It was genuinely funny, and while impatient fans waited for the rains to end, they'd applaud Dempsey lustily. His teammates and members of the opposing team would stand in the dugouts and applaud with the fans, especially when Dempsey concluded his routine with a mammoth belly-flop slide into home plate on the infield tarp, his momentum carrying him for yards, a rooster tail of rainwater behind him.

A portion of Dempsey's routine can be found at the 4:43 mark of this video.

History:  Dempsey was known for his defense which helped him stick around for what seemed like forever.  Over the last three of four years of his career I remember being astonished on an annual basis that he was still playing.  Along the way he won a World Series MVP and two rings.
Since retiring, Dempsey has managed in the minors for the Dodger and Mets and has been on the Orioles coaching staff.  He currently works on Oriole cable TV pre-game and post-game shows and the occasional color commentary.