Mike Ramsey makes his third appearance on a Topps card and is working the mullet-mustache combo.  He was clean cut on his first two cards and would get progressively hairier as he aged.  In his inset picture he looks like he just got away with something. 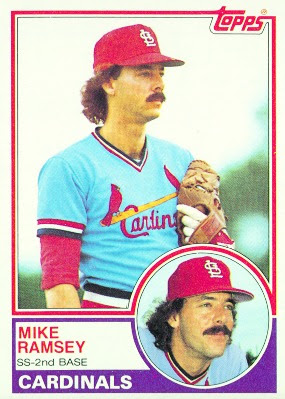 Player: Mike Ramsey was a utility infielder best known for his time with the Cardinals in the early 80's.  He was drafted by St.Louis in 1975 and made his debut in September 1978 getting one hit in five tries.  He spent all of 1979 at AAA hitting only .221.
Ramsey spent the first part of 1980 in Springfield and was called up to St.Louis is May.  He backed up all three infield positions and played in 59 games batting .262/.279/.341.  He returned in that role in '81 with similar results batting .258 in 47 contests.
The switch hitting Ramsey would play a pivotal role in the Cardinals championship run in '82.  He would be an injury replacement for both second sacker Tom Herr and shortstop Ozzie Smith at different points of the year.  Ramsey played in a career best 112 games with 256 at bats.  He batted only .230 but hit his first career HR off Don Sutton on 7/15, a three-run shot in a 4-3 win over Houston.  Ramsey struckout in his only postseason at bat.
Ramsey batted .263 in '83 in 175 at bats as he continued his uber utility role.  He was 1-18 in July of '84 when he was dealt to the Expos.  Strangely, Montreal was coerced into sending both Chris Speier and cash to St.Louis in return.  Ramsey batted .188 on the year and was released the following spring.
Ramsey caught on with the Dodgers in '85 but spent just five weeks with them, getting two hits in fifteen at bats.  He bounced around the minors for the next year and a half before calling it quits.  Ramsey hit .240/.285/.296 in seven major league seasons. 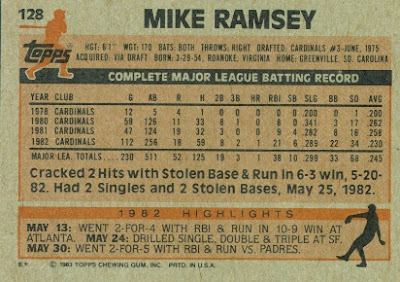 Oddball:  Ramsey had 15 hits in 32 lifetime at bats at Candlestick Park.

History:  Ramsey was the run of the mill good-glove-no-hit utility man during his career.  He had no power and walked in less than 6% of his plate appearances.  He finished his career with a negative 2.5 WAR.  Despite his questionable contributions, scrappy reserve infielder types like Ramsey are generally remembered fondly, especially when they are part of a championship team as Ramsey was in '82.
Ramsey has managed in the minors for the Cardinals, Padres, Rays, and Giants organizations.
Posted by Brandon at 1:57 PM