Willie Aikens swings and misses in a spring training game against the Expos.  This is Aikens' fourth Topps card. 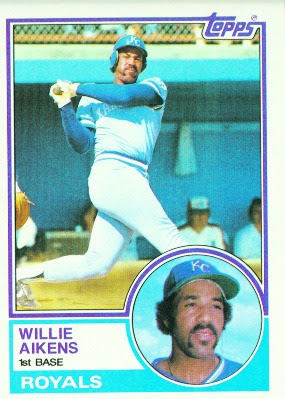 Player:  Willie Mays Aikens was the 2nd overall pick in the 1975 draft by the California Angels.  He had two separate stints with the big club in '77 but failed to impress batting just .198 in 91 at bats.  He spent all of 1978 at AAA and batted .326 with 29 HR.  Aikens made the Angels in '79 and got into 116 contests.  He batted .280/.376/.493 with 21 HR while splitting time between DH and firstbase.
Before the 1980 season Aikens was traded to the Royals with Rance Mulliniks for Al Cowens and Todd Cruz.  Aikens played everyday at firstbase for KC and batted .278 with 20 HR.  His slugging percentage dropped to .433 but he had an impress-ive power surge in the postseason.  After four singles in eleven at bats in the ALCS win over the Yankees, Aikens had a terrific World Series.  Facing the Phillies, he went eight for 20, with four homers, a triple, six walks, and eight RBI in a losing effort.  Aikens was the first player to have two multi-homer games in the same World Series (since equaled by Chase Utley).
Aikens hit 17 home runs in each of the next two seasons batting .266 and .281 in the '81 and '82 campaigns.  In '83 Aikens hit .302 with 23 dingers while playing 125 games.  Things soon fell apart for Aikens as he plead guilty to attempting to buy cocaine on November 17.  The Royals traded him a month later to the Blue Jays.  After serving a suspension until May 15, Aikens was able to start his 1984 season.  He hit just .205 with 11 HR in part time duty.  He spent most of '85 at AAA Syracuse and played in just 12 games for Toronto.  He hit a home run in his last big league at bat on April 27, 1985.
Aikens played in Mexico starting in 1986 and would end up setting several records in the Mexican Pacific League.  He played briefly at AAA Tidewater but never made it back to the majors.  He would continue to play in Mexico through 1991. 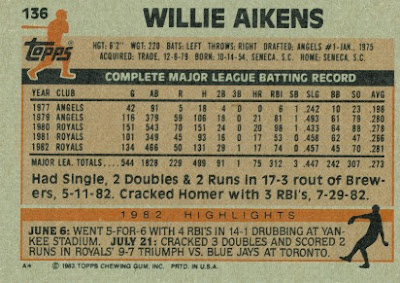 Flipside:  Aikens wasn't the prototypical slugger as he never K'd more than 88 times in a season.
History:  After his playing career Aikens was sentenced to 20 years in prison for various drug related charges.  He was released in 2008 when sentencing laws were revised and he is trying to readjust to society.  A fantastic article about Aikens can be read here.
Aikens played 8 years in the majors with 110 home runs and a .271/.354/.455 stat line.
Posted by Brandon at 8:17 PM