"Whoah, hold up"... That's what I think of when I look at this card of Hubie Brooks as he seems to be looking at the first base coach and returning to the base.  The red and blue borders go well with the Mets colors and the light blue walls of Shea Stadium.  This is Brooks' third Topps card. 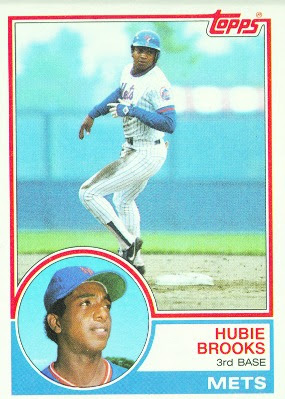 Player:  Hubie Brooks had successful college career at Arizona St. and was drafted several times along the way before finally signing with the Mets after the '78 draft.  He played third base, outfield, and shortstop in the minors, but was used at  the hot corner when the Mets called him up in 1980.  Brooks made a positive impression that fall with a .309 average in 24 games.
Brooks was the Mets everyday third baseman in '81 and although he had not yet developed the power that he would display later in his career he batted .307, 8th best in the NL.
His production slipped in '82 as he battled a hamstring injury, and his paltry line of .249/.297/.317 and a -1.5 dWAR paint a gloomy picture.  Brooks was healthier in '83 but nonetheless batted just .251.
Brooks started hitting with power in '84 launching 16 home runs and driving in 73 runs while moving his average up to .283.  The Mets acquired Ray Knight for the stretch drive and moved Brooks to shortstop.  Brooks didn't have the range of most shortstops but his defense was believable enough to increase his trade value.  After the '84 season the Mets moved Brooks, Floyd Youmans, Mike Fitzgerald, and Herm Winningham to the Expos for Gary Carter.
As Montreal's regular shortstop, Brooks wasn't the greatest with the glove but his value was in his bat.  He hit in the middle of the Expos lineup and drove in 100 runs in '85, becoming the first NL shortstop since Ernie Banks (1960) to reach the century mark.  In '86 Brooks was tearing up the league with a .340/.388/.569 line when he was sidelined with a thumb injury after playing only 80 games.  Brooks struggled with injuries again in '87 as he batted .263 with 13 HR.
After accumulating an assortment of injuries and declining range at SS, the Expos moved Brooks to rightfield in '88.  He hit 34 HR over the next two years batting .279 and .268.
In 1990 Brooks signed with the Dodgers as a free-agent and played one year there, hitting 20 HR with a .266 average.  The next year he was traded back to the Mets for Bob Ojeda but by then Brooks' skills were eroding and he batted just .238 with 16 HR.  The Mets traded him to the Angels where he was a part time DH, hitting .216/.247/.337.  Brooks signed on with the Royals in '93 and platooned in RF hitting .286 with one home run.  Brooks DH'd some in '94 but hit just .230 before receiving his release in July.  In 16 major league seasons, Brooks sported a .269/.315/.403 line with 149 HR and an even 100 OPS+. 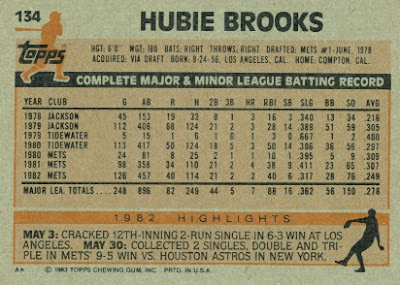 Flipside:  Brooks also had a 4-4 game with a double, triple, and an RBI on May 20th.
Oddball:  Brooks had at least one season at SS, 3B, and RF with -1.0 dWAR.  Not sure how many other players have done that at three positions, but it can't be many.
History:  Brooks had an interesting career and was never able to fill the expectations set by the NY media. He was capable at third base for a while, but over time he was shaky at any position.   By the time teams realized that, injuries and age had reduced his hitting ability and his career was over.  Brooks never got a chance to play in the postseason but he had a nice peak in Montreal winning two Silver Slugger awards and making two NL All-Star squads.
These days Brooks is far removed from baseball and is enjoying retirement. ﻿
Posted by Brandon at 5:27 PM