Topps captures Reds righthander Bruce Berenyi here on his third card.  It is a pretty cool photo as it looks like he is checking out a play at first base. 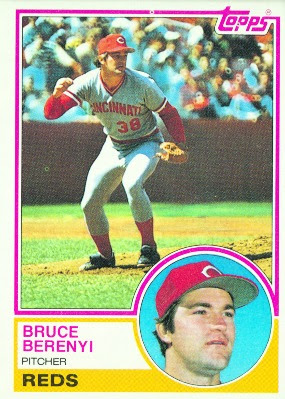 Player:  Bruce Berenyi was a first round pick of the Reds in the June secondary draft in '76.  He debuted with Cincinnati in 1980, and was torched for 24 runs in 27.2 innings.  The hard throwing Ohio native made the Reds rotation in '81 and showed off his powerful right arm, throwing two two-hit shutouts and a one-hitter.  He finished 9-6 with a 3.50 ERA (102 ERA+), led the NL in walks with 77,  and finished fourth in Rookie of the Year voting.
Berenyi was a victim of poor support by his Reds teammates in '82.  He had a nice 3.32 ERA (110 ERA+) but lost a league leading 18 games against 9 wins.  The next year he was decent with a 3.86 ERA, but suffered a 9-14 record.
Control was always Berenyi's downfall and when he started the '84 campaign with 42 freebies in 51 innings, his time as a Red had run out.  Cincinnati sent him to the Mets mid-year for Jay Tibbs and Eddie Williams.  He regained his command with the Mets and was 9-6 with a 3.76 ERA in New York.
Disaster struck early in '85 when persistent shoulder pain was discovered to be a tear in his rotator cuff and he was shelved after just three games.  He rehabbed well and made the '86 squad as a long reliever.  He was inserted into the rotation in May but was ineffective in seven starts and was demoted to AAA.  The timing couldn't have been worse as the Mets went on to win the World Series without him.
Berenyi was released after the '86 season and signed with the Expos.  He reinjured his shoulder in spring training and a second rotator cuff surgery signaled the end of his career.  Berenyi's once promising career was over at age 32.  Lifetime, he had a 44-55 record with a 4.03 ERA (91 ERA+).
Stuff:  Fastball in the 90s, slider, curve, change 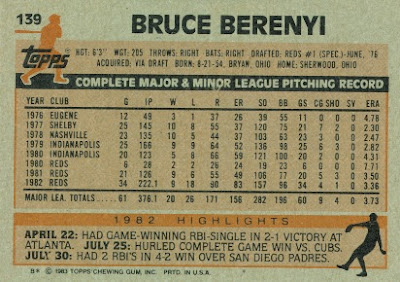