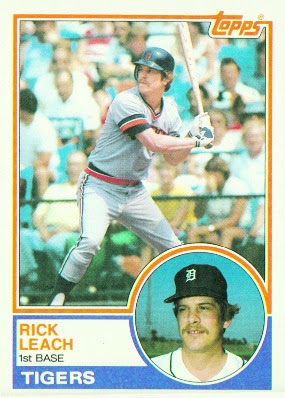 Player:  Growing up as a Michigan football fan Rick Leach was a pretty big deal.  He was a running quarterback at the University of Michigan and was an All-American in both football and baseball.
Leach was drafted by the Denver Broncos in the fifth round of the NFL draft in 1979 and the Tigers took him a month later in the first round.  He chose baseball and showed good on base ability in the minors.  Leach was called up early in the '81 season and the lefty played in 54 games at first base and right field.  He struggled to hit advanced pitching and posted a .193 average with one homer in 83 at bats.
Leach spent '82 as a part time player for the Tigers.  In 82 games he posted a .239/.303/.330 line with three home runs.  Playing primarily first base in '83 his hitting improved, but not much.  Leach was pretty good with the glove however posting 1.1 fielding WAR.
In '84 the Tigers acquired Darrell Evans and Dave Bergman and Leach was cut in spring training.  He signed a week later with the Blue Jays organization where he would spend the next five seasons.  He was mainly a pinch hitter in '84 and batted .261 in 88 at bats.  He spent most of the next season at AAA Syracuse and played just 16 games with Toronto.
In '86 Leach got into 110 contests as a DH, pinch hitter, and reserve corner outfielder.  He had a career best .309 average along with five home runs and 39 RBI.  Leach continued in this manner batting .282 and .276 in the '87 and '88 seasons.
After the '88 season Toronto let him walk and he signed with the Texas Rangers.  He filled the same role with his new team and batted .272/.358/.351.  He left Texas after the '89 season for San Francisco where he served as a pinch hitter.  He was batting .293 in August when he was handed a 60 day suspension after a positive drug test.  The suspension ended his season and Leach retired when he was released by the Giants the following spring. 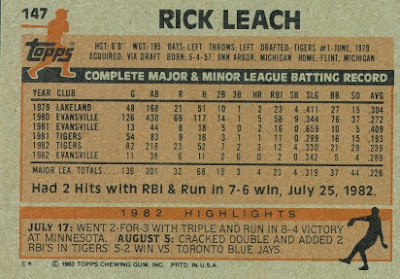 Flipside:  Leach had two three-hit games in '82, both times with two singles and a double.
Oddball:  Before receiving his 60-day suspension Leach had gone AWOL on his team twice during his career.  Once in '87 when he went on a cocaine binge and again in '89 when police later found marijuana in his hotel room.
Leach and Dave Gallagher are the only two players in history with exactly 100 career doubles and 10 career triples.  If you like stuff like that, you should follow High Heat Stats Twitter feed.
History:  Leach didn't live up to the promise of a first round pick and was out of the game by age 33. He never played in the postseason as he was released by the Tigers in '84 and did not make the Blue Jay playoff roster in '85.  In ten seasons he batted .268 with 18 home runs.  After his playing career Leach became an insurance agent.﻿
Posted by Brandon at 8:01 PM