Hey, this is this Dave Roberts' 10th Topps card.  Don't mistake him for this Dave Roberts or this one or this one.  Not everyone cares for the powder blue / maroon mix on these Phillies uniforms but I like them.  This looks like it was taken at Shea Stadium.  If it is, then it can be narrowed down to a single he he hit off Randy Jones on 4/13 since that was his only at bat at Shea as a Phillie. 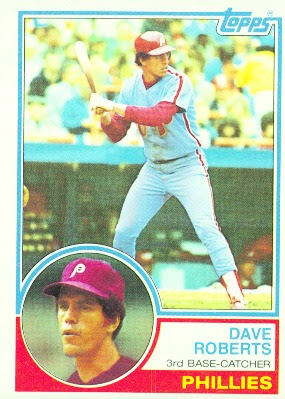 Player:  The Padres chose Dave Roberts with the first overall pick in the '72 draft.  A shortstop from the University of Oregon, he signed and made his debut the next day, going 0-3.  The Padres used Roberts at third base and second base and he stayed with San Diego the rest of the season.  Playing in 100 games he batted .242 with five home runs.
Roberts struggled to start the '73 season and spent several weeks in the minors and a few more riding the pine.  His bat caught fire as the season went on.  These are his monthly batting averages: .083-.200-.287-.310-.302-.308.  He also displayed some power knocking 21 over the fence.  He finished the year with an OPS+ of 123 and a .286/.310/.472 line.
In 1974 Roberts again got off to a poor start.  He was unable to snap out of the funk and finished the '74 season with an abysmal .167 average and five HR in 318 at bats.  He spent most of '75 in the minors.  Roberts batted .283 with a pair of home runs in 113 at bats after he was called up in August.
The Padres acquired veteran third sacker Doug Rader in '76 and decided to keep Roberts in the minors and convert him to catcher.  He spent the whole season at AAA Hawaii and batted .249.  After the season the Padres sold him to the expansion Blue Jays, who decided to trade him back to San Diego before the '77 season started.  Roberts spent the next two seasons as a backup catcher and filled in all over the field.  He wasn't much with the stick as he managed just a .220 average in '77 and a .216 mark in '78.
During the offseason the Rangers acquired Roberts and Oscar Gamble from the Padres in exchange for Mike Hargrove, Bill Fahey, and Kurt Bevacqua.  Roberts would play only 44 games in a hyper-utility role for the Rangers in '79 as he played every position but shortstop and pitcher.  His flexibility was a nice addition to the roster and his offense was decent with him batting .263 with 3 HR in 84 at bats.  In 1980 he filled the utility role once again mainly playing third base, shortstop, and catcher.  He hit 10 HR in 235 at bats with a .238/.280/.383 line.
The next year the Houston Astros signed Roberts to an amazing five-year, $1.3 million dollar contract.  He would play sparingly batting .241 in 54 at bats.  He was traded to the Phillies during spring training of '82 but his season was hampered by two stints on the disabled list.  He had just 36 plate appearances with a .182 average.
Roberts would start the '83 season on the DL but was released in May and subsequently retired.  He played 10 seasons in the majors with 49 home runs and a .239 batting average.   ﻿ 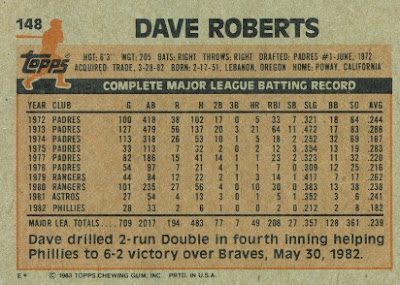 Flipside:  It's hard to find highlights for a guy with only six hits on the year.  It seems odd that Topps would issue a card for Roberts but the Phillies had eight players who played between 16 and 35 games and they probably didn't know who to choose.
Oddball:  Roberts is one of five players in MLB history to play at least 5% of their career games at C, 3B, SS, and 2B.
Topps was left hanging after Roberts went from San Diego to Toronto and back to San Diego during the '76/'77 off-season.  Topps included new Blue Jays and Mariners in the '77 set even though they hadn't played a game yet.  This resulted in Roberts being air-brushed into a Toronto uniform he would never wear.
History:  For the second consecutive post, we have a former first round pick who never lived up to the hype.  Roberts had a promising year in '73, but the league caught up with him and he regressed.  His versatility provided some value but he was a poor defender at the hot corner.
He managed the Eugene Emeralds in 1984, a short season single-A team in the Royals chain.  The Emeralds stunk up the place with a 19-55 record and Roberts decided that managing wasn't for him.  ﻿
Posted by Brandon at 7:29 PM