Ed Ott...what a name!  In fact none shorter in MLB history.  As someone with fourteen letters in their name, I was jealous of the catcher who could sign an autograph with a mere five.  Anyway, here is Ott busting out of the batters' box on his 7th and final Topps card. 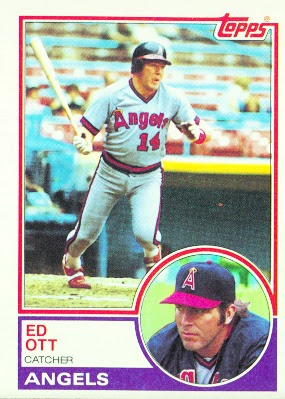 Player:  Ed Ott was originally an outfielder in the Pirates chain.  Drafted in the 23rd round in 1970, he was solid but not spectacular in the minors.  He had five at bats without a hit in his first taste of big league baseball during a two week stint in June 1974.  Ott converted to catcher in '75 and spent most of the year honing his new found receiver skills at AAA Charleston.  Called up in Septmeber, he had one hit in five chances at the tail end of the season.
Ott made the Pirates squad in '76 and spent the year as the #3 catcher behind Manny Sanguillen and Duffy Dyer.  Ott didn't play much as evidenced by his 39 at bats.  He made the most of it, batting .308.  With Sanguillen traded to the A's, Ott platooned in '77 with Dyer.  Ott batted .264 in 311 at bats with 7 HR and a 94 OPS+.  He threw out 44% of attempting base stealers to rank third in the NL.  On August 12th after a hard slide into second base, Ott and the Mets Felix Milan got into a scrap.  Ott, an accomplished high-school wrestler, slammed Milan to the ground breaking the infielder's collarbone and ending his career.
Ott returned as the left-handed half of the Bucs catcher duo in '78 and batted .269 with a career best 9 HR.  His defense slumped though as he led NL backstops with 15 errors.  Platooning with Steve Nicosia in '79, Ott batted .273 with 7 HR.  The "We Are Family Pirates" knocked off the Reds in the NLCS with Ott batting 3-13.  Ott had a solid World Series batting 4-12 with a double as Pittsburgh won the Series over the Orioles.
In 1980 Ott's production dropped slightly to .260/.317/.357.  He hit 8 HR with 41 RBI in his last season with Pittsburgh.  On the verge of the '81 season he was traded to the Angels with Mickey Mahler for slugger Jason Thompson.
Ott saw his batting rates drop like a rock in '81 as he hit just 217/.266/.279 for the Angels.  He tore his rotator cuff before the '82 season and was out the entire year.  He found the road back difficult as he played just 16 games over the next two years, all in the minors.  Ott retired after the '84 season with a .259/.311/.368 slash line in 8 years of MLB action.
﻿ 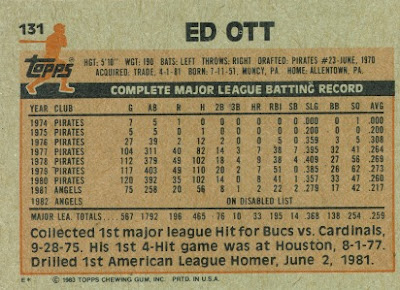 Flipside:  Yep, there it is, Ott was on the DL the entire year yet he still got a card.  Strange.

Oddball:  Plain and simple,  Ott is a bad-ass and is nicknamed the Troll for his tough demeanor.  Pirates captain Willie Stargell had trouble with players stealing the stars that he handed to players in the late 70's.  So Willie had Ott hold onto them for safe keeping. As Willie said, "Nobody would mess with the Troll."
Ott didn't turn softy when he became a coach.  He was suspended for several games in '92 for turning Rob Dibble's face blue when he put the pitcher in a choke hold during an Astros / Reds brawl.