Willie Randolph’s 8th Topps card show’s him busting out of the box.  The inset picture seems a little weird, he looks kind of like a zombie.  Randolph was a quiet guy and one of my favorite non-Tigers when I was growing up. 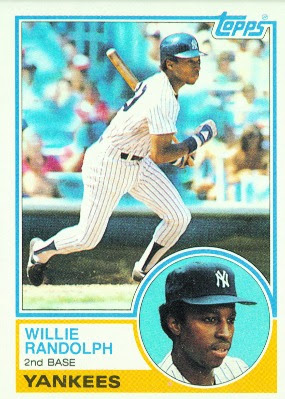 Player:  Drafted by the Pirates in '72, Willie Randolph moved steadily through the minor league system and debuted in 1975.  The young secondbaseman got into 30 games and batted .164 in 70 plate appearances.  After the season Pittsburgh packaged Randolph, Dock Ellis, and Ken Brett in a deal that brought Doc Medich in return from the Yankees.
Randolph had a nice opening act in New York as he played stellar defense (1.8 dWAR), stole 37 bags, and had a respectable stat line of .267/.356/.328.  He made the AL All-Star squad, an honor he would attain four more times in addition to making one NL squad.  He scuffled at the plate in the postseason getting just three hits in 31 at bats.  Randolph had a similar offensive season in '77 and was among league leaders with 11 triples.  The Yankees won the World Series although Randolph batted just .160 against Dodger pitching.
Randolph would further improve in '78 posting a .279/.381/.357 line and stealing 36 bases.  A late season injury ended his season in September and kept him from contributing to the Yankees' second consecutive championship.  Randolph would continue his steady play over the years and walked a league best 119 times in 1980 helping him to a 133 OPS+ and a Silver Slugger award.   Although the Yankees were swept by the Royals in the ALCS, Randolph had five hits in the three games.
In 1981, Randolph batted only .232 in the regular season but surprised the opposition with three playoff homers, including two in the World Series loss to the Dodgers.  He proved his consistency, batting .276 to .287 over the next five years.  His good eye and patient approach showed in his .377 on base percentage over the same time frame.  He batted over .300 for the first time in '87 with a .305 mark.  The only blemish was his health, as various injuries allowed him to play an average of only 129 games from '82-'88.  He slumped to .230 in '88 in his last season as a Yankee.
Randolph signed with the Dodgers in '89 and sported a .282 average and 101 OPS+ in 145 games.  In May of 1990, LA sent Randolph to the A's for Stan Javier.  Nagging injuries marred the season once again, and Randolph batted .260 in 119 games.  After a nine year absence from the postseason, he batted .304 in 23 at bats, but the A's petered out against the Reds in the World Series.
The 36 year-old Randolph signed with the Brewers for the '91 season and had quite a season.  He batted .327 which was good for third in the league.  Once again a free agent, Randolph caught on with the Mets and batted just .252.  He missed 48 of the last 49 games and retired following the season.
Randolph ended his 18 year career with a line of .276/.373/.351, 2210 hits, 1243 walks, and only 675 strikeouts. 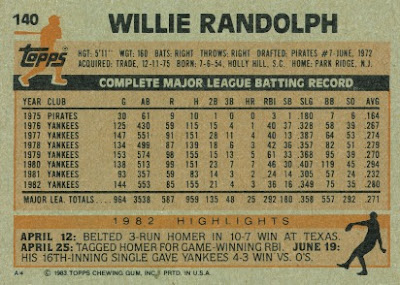