You can see here that Dwight Evans has a classic finish to his swing.  In the inset notice that Evans' mustache just needs a little wax and attention to rival Rollie Fingers.  This is his 11th Topps card. 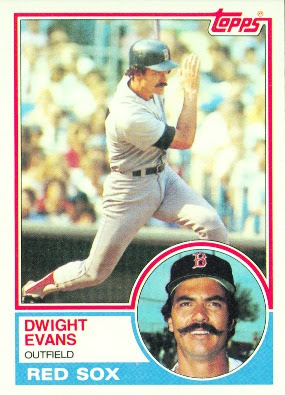 Topps was really boring with Evans' cards in the 70's.  From left to right here are his cards from '73-'76,'78 and '79.
I framed the shots to show the similarity as Topps had Evans in staged batting pose each year until finally giving him an action shot in '77. 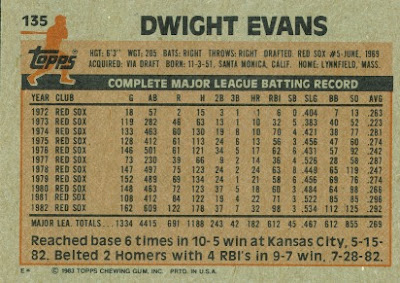 Flipside:  As you can see in his stats, Evans gradually developed into quite an offensive player.  Although known for his power and ability to draw walks he failed to hit 20 or more HR or walk more than 60 times in a season until his sixth full year.
Oddball:  As a kid in the 80's it always seemed like Evans was destroying Detroit Tigers pitching.  My memory isn't far off target.  He hit 38 HR against the Tigers, his second best total (39-A's).  He particularly liked Jack Morris (5 HR allowed), Milt Wilcox (5), Dan Petry (4) and Frank Tanana (3).
History:  Evans had a great career, bordering on Hall of Fame-worth-i-ness.  He won eight Gold Gloves, two Silver Sluggers, was on three All-Star teams, and received MVP votes five different years.  He accumulated 61.8 career Wins Above Replacement which is 97th All-Time among positional players.  His HOF voting topped out at 10.4% in 1999 before he dropped off the ballot.
After his playing days, Evans coached in the minors for the White Sox and later for the Rockies.  He returned to Boston as their hitting coach in 2002 and has been a player development consultant for the Red Sox since 2003.
Posted by Brandon at 9:03 PM