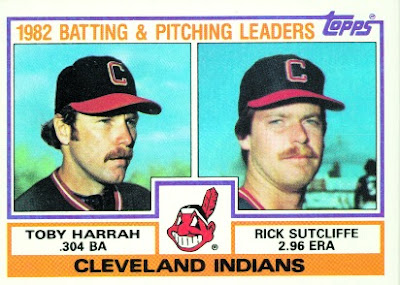 Here we have a pair of Indians that both look strange without their beards.  Veteran Toby Harrah led the Tribe in batting average by 31 points.  Sutcliffe led the Indians and the entire AL in ERA.  Among his teammates, he was bested by Len Barker in strikeouts 187 to 142, and wins 15 to 14. Slugger Andre Thornton brought the thunder with a team high 32 homers and 112 RBI.
The Indians put up 78 wins against 84 losses to finish 6th in a strong AL East. 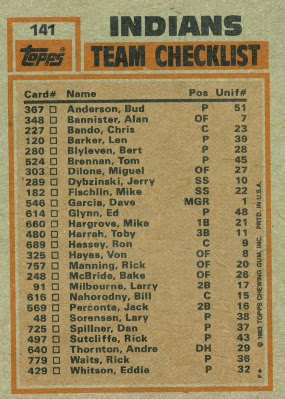 Flipside:  Topps included 26 Indians in the set including Manager Dave Garcia.  Bert Blyleven who only pitched in four games in '82 is the lone Hall of Famer present.  Rookie Carmelo Castillo played in 20 more games and batted 41 more times than Bake McBride who didn't play after May 21, but Topps deferred to the veteran while Castillo would have to wait for his first card.

The Indians led the AL in walks with Hargrove and Thornton both topping 100 and Harrah adding 84.  The problem was manager Garcia was prone to batting Dilone and his .286 OBP leadoff.  As a team, they could get on base but were 12th in slugging so they had trouble getting them home.  It didn't help that Thornton didn't have any protection behind him.

Utility man Alan Bannister played all over the place and owned a .346 OBP.  Garcia sometimes put him in the leadoff spot where he was a better option than Dilone.  The middle infield was a weak spot shared by Perconte, Fischlin, Larry Milbourne, and Jerry Dybzinski.  Hassey's bat was so-so while getting the bulk of playing time at catcher.  He was backed up by the light hitting duo of Chris Bando and Ron Nahorodny.

Manning was mediocre in center.  A young Von Hayes patrolled RF, playing good defense but he hadn't yet developed his offensive game.  He did have a little pop with 14 dingers, joining Harrah (25), and Thornton (32) as the only players with more than eight.

Pitching staff:
This was definitely a sore point as they finished 11th in ERA despite boasting the league leader in Sutcliffe who started the year in the pen and didn't join the rotation until mid-May.  Len Barker ate up the most innings with 244 and recorded a 3.90 ERA.

Larry Sorensen started 30 games while Rick Waits and John Denny started 21 apiece at the back of the rotation.  All three posted ERA's north of 5.00 and Denny was shipped off to Philadelphia late in the year.

Dan Spillner had a 2.49 ERA and 21 Saves as the ace reliever.  Ed Whitson, Tom Brennan and Bud Anderson all started a handful of games when they weren't pitching middle relief or setting up Spillner.  Ed Glynn was the lone lefty reliever.

If Blyleven had been healthy, or Denny pitched like he did in '81 or '83, they no doubt could have finished over .500.