Wow, Woodie Fryman looks pretty hefty in this pic.  This is his 18th and final Topps card. 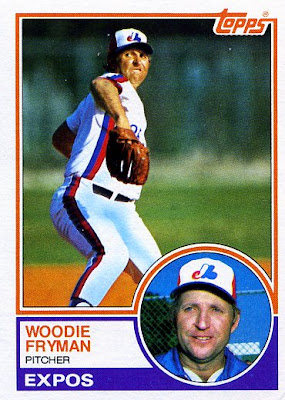 Player:  Woodie Fryman was discovered by the Pittsburgh Pirates pitching semi-pro ball in Kentucky in 1965.  Already 25 years old, he initially shaved three years off his age to increase his prospect status.  He wasted little time in the minors, pitching just 64 innings before making his debut in '66.
Fryman did relief work to start the year but was in the rotation by the end of May.  His '66 season was highlighted by a stretch of three consecutive shutouts in which he allowed only seven hits.  He slumped to end the season, and finished 12-9 with a 3.81 ERA.  He was in and out of the rotation in '67 with a 4.05 ERA and a 3-8 record.
After the '67 season the Pirates sent Fryman and three others across the state to the Phillies for Jim Bunning.  Philly used Fryman in the rotation and he recorded a 2.78 ERA with 12 wins.  He had five shutouts and was named to the NL All-Star squad.   He won another 12 games in '69 but saw his ERA jump to 4.41.  Over the next two and half years Fryman bounced back and forth as a starter and reliever with mixed results.
In August of '72 the Detroit Tigers plucked Fryman off the waiver wire and quickly put the 32 year-old lefty to work.  He went on to win 10 games down the stretch for Detroit with a sharp 2.06 ERA.  Fryman's performance helped push Detroit into the playoffs where they faced the Oakland A's.  He lost both his decisions in the ALCS giving up five earned runs in 12.1 innings.
Fryman wasn't effective the next two years, struggling with a 4.89 ERA and 12-22 record over the '73/'74 seasons.  The Tigers sent him to Montreal for Tom Walker and Terry Humphrey, and Fryman would spend the next two years as an Expo.  He had two fine seasons winning 22 games over this span with ERAs of 3.32 and 3.37.  He was named to his second NL All-Star team in '76, but once again did not play.  After the season the Expos sent Fryman to the Reds in the Tony Perez deal.
Fryman clashed with Reds management and he quit the team halfway through the year.  He wasn't pitching well at the time with a 5.38 ERA in 75 innings when he left the team in July.  After the season he was packaged in a deal to the Cubs where he pitched in 13 games in '78 before returning to Montreal in a deal for Jerry White.  He pitched much better once he returned to the Expos and posted a combined 7-11 record with a 4.19 ERA.
Now 39 years old, the portly port-sider would be used exclusively out of the pen and saved ten games with a 2.79 ERA in '79. He did even better the next year, saving 17 with a 2.25 ERA over 80 innings of work.  Despite his advancing age, Fryman's ERA dropped for a fifth consecutive year to 1.88 in '81.  Still effective at 42, he saved twelve games with a 3.75 ERA in '82.  Fryman pitched just three innings in '83 before his rubber arm finally gave out.
In 18 seasons Fryman compiled a career record of 141-155 with a 3.77 ERA (96 ERA+) and 58 saves. 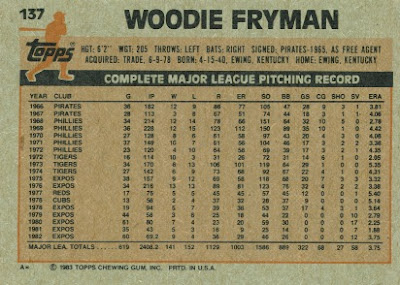 Flipside:  Those are some tiny stats on the back and nearly his complete career totals.  Expos skipper Jim Fanning certainly didn't baby the veteran lefty in '82, as he appeared 19 times after pitching the day before.
Oddball:  Fryman loved pitching at Busch Stadium in St. Louis, recording a career ERA of 1.99 in 108.2 innings.
History:  Fryman was a nice pitcher to have on the roster, for most of his career he was counted on to fill many roles.  He was a two-time NL All-Star and although he never won a World Series many will remember him as the key acquisition that helped the Tigers win the East in '72.
Fryman was often referred to as Farmer because of his tobacco plantation that he operated.  He stepped right back into that role upon retirement from the game.  He passed away on 2/4/11 from Alzheimer's disease.  ﻿
Posted by Brandon at 4:06 PM